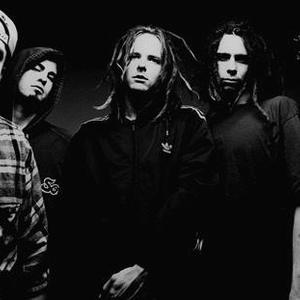 Korn (stylised as Ko?n) is an American nu metal band from Bakersfield, California, formed in 1993. The current band line up includes four members: Jonathan Davis, James Shaffer, Reginald Arvizu, and Ray Luzier. The band was formed as an expansion of L.A.P.D. They have collaborated with musicians such as Chino Moreno from Deftones, Fred Durst from Limp Bizkit, Ice Cube, Tre Hardson from The Pharcyde, Skrillex and Nas.

The band released their first demo album, Neidermeyer's mind, in 1993. Their debut album, Korn was released in 1994, where they featured the same musicians that had performed on Neidermeyer's Mind. The band began recording Life Is Peachy in April 1996, and released it on October 15, 1996. Follow the Leader is recognized as Korn's mainstream breakthrough, peaking at number one on the Billboard 200 in 1998, along with the following album, Issues in 1999. The band released Untouchables on June 11, 2002, and later released Take a Look in the Mirror on November 21, 2003, both peaking in the top ten of the Billboard 200. Their first compilation album, Greatest Hits Vol 1, peaked at number four on the Billboard 200. See You on the Other Side was released on December 6, 2005, and Korn's Untitled album was released nearly two years later on July 31, 2007. Korn III: Remember Who You Are, the band's ninth studio album, was released July 13, 2010 via Roadrunner Records.

The Get Up! Songfacts reports that Korn's 10th studio album, The Path of Totality was produced by various dubstep, drum and bass, and electro house artists due to the band's desire to fuse their traditional sound with electronic elements. released on December 2, 2011 in Europe and December 6, 2011 in the US. Davis explained the album title: "The title The Path of Totality refers to the fact that in order to see the sun in a full solar eclipse, you must be in the exact right place in the exact right time. That's how this album came together. I think all the producers feel the same way. I'm not sure it could ever happen again."

Korn currently has 36 singles, 25 of which have charted. The band has six video albums and 34 music videos.

Korn has sold 16 million albums in the US, and over 40 million worldwide. Ten of the band's official releases have peaked in the top ten of the Billboard 200, eight of which have peaked in the top five. Eight of those releases are certified Platinum by the RIAA, and one is certified Gold. Korn have also earned seven Grammy nominations ? two of which they have won (for "Freak on a Leash" and "Here to Stay").

They were the first band to be labeled as nu metal, starting the New Wave of American Heavy Metal. Alongside this genre, the band has also been labelled as heavy metal, alternative metal, alternative rock, post-grunge, hard rock, rap metal, funk metal and industrial metal. Their debut album mixed metal, rock, hip-hop, groove, and dissonance. Their lyrics focus on pain and personal alienation rather than traditional heavy metal themes. In Nu-metal: The Next Generation of Rock & Punk, Korn was marked as the third biggest nu metal band in the world.

The Devil Went Down To Georgia (CDS)

The Serenity Of Suffering