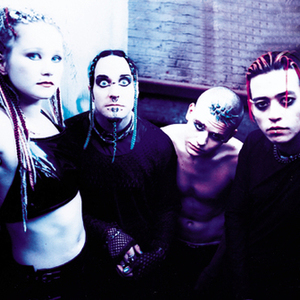 Coal Chamber is a nu metal band from Los Angeles, CA, USA formed in 1995. They enjoyed some mainstream success in the mid to late 90's during the nu metal boom which they, along with bands like Ko?n helped create. The band gained a large following early in their career, arguably because they were one of the first 'darker' themed nu metal bands. Coal Chamber signed to Roadrunner Records and recorded their first album (both in 1996) for their self-titled debut in 1997.

Coal Chamber signed to Roadrunner Records and recorded their first album (both in 1996) for their self-titled debut in 1997. The album was released to critical praise, especially for the first single Loco, a track that many fans consider the bands finest work.

Their next album was released in fall of 1999 entitled Chamber Music. This album was considered a step away from the nu metal image they had engendered with their prior release, having instead a more gothic metal inspired feel. On this album also was a cover of a song originally done by Peter Gabriel in 1982 called "Shock The Monkey" with legendary rocker, Ozzy Osbourne, providing vocals in collaboration with the band's lead singer, Dez Fafara.

The band followed up with their third album Dark Days in the spring of 2002, which met with mixed reviews. Bassist Rayna Foss-Rose had left the band to raise her daughter before the album was recorded; she was replaced by Nadja Peulen, who had taken Foss-Rose's place during her pregnancy between the first two albums. Rayna had a falling out of sorts with frontman Dez Fafara saying that she and her husband had "found Christ" and would be leaving Coal Chamber for good.

Late summer 2003, saw the release of a compilation album titled Giving The Devil His Due, which included several demo tracks submitted by the band prior to their signing with Roadrunner Records in 1997, along with several alternate studio recordings and remixes of various tracks from their previous releases. Coal Chamber disbanded in 2003, shortly after lead vocalist Dez Fafara left to form the Hard Rock turned Melodic Death Metal group DevilDriver.

In June 2005, Fafara stated that Coal Chamber's hiatus is permanent and will not be reforming at any time in the future. However, in September 2011, it was announced that Fafara, Cox and Rasc?n would reform the band with bassist Chela Rhea Harper, to play the Soundwave shows in Australia.

Giving The Devil His Due