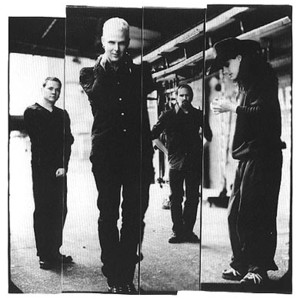 Gravity Kills was an industrial rock band which formed in Jefferson City, Missouri, United States in 1994. First appearing with a demo for Goodbye on the Mortal Kombat movie soundtrack in 1995, they had their first hit single with Guilty off their 1996 debut album Gravity Kills. Further soundtrack appearances on Escape From L.A. and Se7en along with music videos for Guilty, Enough and Blame also helped bring exposure, often having had comparisons drawn to early Nine Inch Nails by the press.

Their other singles that followed were Down from the debut (the final single released from the debut album), Falling and Alive off 1998's Perversion and finally One Thing and a cover of Depeche Mode's Personal Jesus (with an accompanying music video) both from 2002's Superstarved, though all were only minor successes compared to their early hits.

Following a severe injury to keyboardist Doug Firley's hands, they were unable to complete a tour for Superstarved and broke up in 2002. Gravity Kills reunited to perform a one-off final show on October 28, 2005. There is a discussion on the Gravity Kills official forum about the possibility of the band performing another Halloween show; the topic is not a random rumor, as it was originally posted by Jeff Scheel.