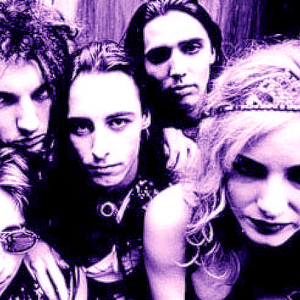 While it seems implausible, Lords of Acid have not always been the mega-cool super cult we know and love. Yes, there was a time where they were not the bulwark of sex, substance, style, and nether-darkness. There were simpler, more innocent times ... Back in the primitive days of yore - somewhat after the waterwheel was brought to Europe, a uniquely gifted group of somehow different, yet fated, individuals were brought forth onto The Continent - as they called it then - by an unknowing group of parents.

Back in the primitive days of yore - somewhat after the waterwheel was brought to Europe, a uniquely gifted group of somehow different, yet fated, individuals were brought forth onto The Continent - as they called it then - by an unknowing group of parents.

Maurice Engelen, whom we all know better as Praga Khan, was born to a father who was a Noble winning mathematician and astrophysicist, with a penchant for absinthe, along with strange, skunky cigarettes. Yes, Mom was there, too! And what a mom! Praga's mother was a rebel for her times and worked to support the family as a migrant construction worker.

Praga's fascination with industrial sounds and rhythm laid its entwined roots in his early childhood while strapped to his mother's back as she performed her welding work in buildings towering high above the earth, echoing with the sounds of jackhammers, big trucks burrowing, and the soulful singing of the workers. Its harkening thought today still brings tears to his eyes.

His father passed to his son his fascination with numbers and alternate realities. Praga notes being to many different worlds during his travels. He understands his music, when he can be coaxed into an explanation, to explore varied perceptions of the mathematical impossibility of two objects being in the same time, place, and dimension. He attributes a correct comprehension of the harmonic convergences implied in their musical themata, to be a key in the explanation of the freak and random disappearance of a number of noted Lords enthusiasts. (The suits being pressed have been settled, though. It was Marilyn Manson, not the Lords. And they were nowhere near Colorado.)

Nikkie Van Lierop as everyone knows, "Jade 4 U", "Darling Nikkie" - or "Nikkie Darling" in Japan, came from a family decanted from the glory days of the Imperial Russian court. It is believed that her father was the illegitimate offspring of the scourge of Moscow - perhaps all Russia, Rasputin. Her mother was one of the foremost followers of Helena Petrovna Blavatsky. It is felt that Nikkie's unusual powers of persuasion and animal magnetism derived from that genetic matter imbued with the superhuman abilities manifested by Rasputin, and that her mother provided the insight and experience in guiding her development.

Following what was recounted to her as being a slight matter of family, her family quietly, but hurriedly, slipped out of Mother Russia in the very tender years of her infancy, so she remembers little of its regal flame. She grew up amidst the Belgian countryside, learning its language and customs. As she entered her early teens she became increasingly headstrong, and equally obsessed with the sexual darkness that was - Mick Jagger. Following a major brouhaha with her family and the sound of her heart, she set off to London in search of him. Unfortunately, Mick had found Bianca and was in the midst of their big American tour. This was how Nikkie ultimately found herself a regular of King's Road and became one of the reigning queens of the punk scene. If you can name them - she was with them. Yes. All of them. She took up music, forming several high profile, glorious, but ultimately failed bands, X-Rated Specs, The Sex Pistils, and The Talking Head. As Punk turned to New Wave, enchantment turned to disgust and she found herself returning home to Belgium to start her own scene and do further bands.

Oliver Adams, whom we all know as Oliver Adams, is the heir to the Stella fortune. Stella, being Belgium's premium connoisseur brew, has been exported throughout the world. So has Oliver. Oliver's childhood, too, was an unusual one. His parents, ever vigilant against the perils of war, took up residence beneath the earth. They seized upon a project of burrowing deep into the earth's bowels and, using layers of aging tanks for their beer, built an airtight underworld infrastructure, the inside of which they inhabited during most of his younger years. His mother was a master pianist and their hutch regularly resonated with the eerie sounds of her piano or clavinet echoing throughout the long empty metal halls. His father, Lorre Adams, because of his profile and note as a world traveler, was sought out by the Belgian ruling council to act as a surreptitious examiner of foreign evils - in short a spy on behalf of the Belgian King.

Due to his family's prominence and his father's not so covert activities, Oliver and his twin brother Ferdy, were abducted several times during Oliver's rise to young adulthood. When Mother, as he so lovingly nicknamed her, began losing the battle with age, Oliver determined it was best to sprout wings and leave the roost so as not to be a source of leverage against his wearied family. Following many narrow escapes with death and a bout with an unmentionable disease acquired abroad, Oliver discarded his family crest and went out into the world to establish a new identity of his own.

It was several years later that found Oliver working as the DJ at the notoriously hip but sexy fetische club-cum-donut shop called Der Schwingle. As we all know, this was the center of the cultural world in Europe at the time. It was Belgium, it was punk, and the rest is as they say - history. Amidst the milling throngs - socialites, homeless, and orphaned infants hobnobbed and otherwise performed all other manners of eccentric behavior with royalty, infantry, and members of the world's other oldest profession. In short - every night was an adventure. And, it was one such night that found our heroes thrown into the spin cycle of life and being hung out to dry on the line en masse.

Nikkie, who had swelled to the rank of defining diva of the European Court of Clubs, was holding court with several dozen of her inner circle whom had come to see a band called Channel X fully in the belief that there would be some interesting music and substances to be had. They were disappointed on neither count. Even more so, as the crowd picked their jaws up off the floor from the set's first number, she noted with a sly grin that the leader of the band, one Praga Khan, was packing. The evening flew by in a whirl of music and ecstasy. Smiles, laughs, grins, and hugs. And then the lights went down. The music stopped. And the show was over. The encores had been had, but the crowd was not having it. They would not be denied more. However, the band had played their set, done their encores and had nothing more to give. A chanting rose from the audience - at first desirous, then demanding, and ultimately surly. The band stumbled offstage. Someone screamed something that translates to sort of, "If they're not going to get us more fucked up, then let's fuck them up!" or something of a similar twist (I told you it was cultural...). Bottles were hurled, tables were turned, and not just a brawl, but a melee ensued. (And you know that the word "melee" is of Belgian origin, of course. And, with not without good reason!) Tens ugly minutes later, Praga and Nikkie found themselves side by side with Oliver huddled beneath the protection of the DJ booth ducking a hail of broken glasses, liquids, and body parts (if there are any boxers in need of ear parts, baby, this was your kinda club!) . As the gendarmes broke in and began to break up the evenings fun, Oliver, while knowing neither of his two booth amigos personally, was kind enough to vouch for both of them as being friends and having nothing to do with the matter at hand. Due to his being the DJ and a close family friend of the Chief of Police, they were subsequently escorted out of the premises and into Oliver's limousine. While cruising back to Antwerp accompanied by the rising colors of the dawn, behind tinted windows, drinking champagne out of Nikkie's pocketbook, they discovered they had a lot in common. That lot eventually became the Lords.

Cut to many years, and almost 1,500,000 albums later. Lust - the band's tribute to sheer animal passion, Voodoo-U - their testament to Crowleyian sex-magic, and Our Little Secret - the album putting forth the secret of immortality, have all come and gone. Rough Sex, too, has come and gone. The Crablouse has scratched itself off. Rubber Doll has been deflated and put away. Pussy has closed up and been done with. For some...

Lords of Acid's remix record, "Expand Your Head", is a testament to the band's continuing vision and impact in our world. The many fans among us refuse to let them stop for even a moment, and continue, along with the band, to re-invent them anew on their own. There is life here, and joy, and fun. This record contains personal interpretations of many of the Lords favorite artists' impressions of their favorite Lords gems. It is a dark and raucous ride not to be missed. Four new Lords tracks highlight the sparkle on this blue diamond of a disc. "Am I Sexy?" is even featured in the trailer for the new Austin Powers film, "The Spy Who Shagged Me". Groovy. But of course... The Lords are with you now and forever. Wear it in your tiara, baby.

The Lords have always been pioneers in their selection of artists to rework their music. They continue to be among the first to highlight exciting new talent. That tradition is followed here. Re-interpretations found on the record come from KMFDM, Rob Swift, Tipsy, Joey Beltram, Frankie Bones, Richie Hawtin, Critter, Robbie Hardkiss, Chris Vrenna, Luc Van Acker, Jamie Myerson, God Lives Underwater and Carl S. Johansen. The sounds run the gamut of aural experience. Plug in. Turn on. Get off. Expand Your Head is about just that. Lots of fun -no one dies! Swell!

In 2000, Farstucker became the fourth full-length studio album from the Lords and marks the band's full transition from the techno of their earlier work to an industrial rock outfit, with use of more live instruments and a hard-hitting guitar-driven sound. This is the first Lords of Acid album to be released following the departure of founding member Nikkie Van Lierop (aka Jade 4 U), and the first featuring new vocalist Deborah Ostrega.

Now, despite numerous lineup changes, world tours, 1.5 million album sales, and every possible point of crisis and conflict a band can face, LoA is returning to tour the unsuspecting United States again, this time with a new crew of deviants, dilettantes, and sonically transmitted diseases. Giving voice to the seductions and syllabic sadism of Praga's songs is DJ Mea the former vocalist of Me And My Machine. Providing the primal throbs to DJ Mea's pulsating gyrations is M3, former bassist of POWERMAN 5000, and Virus (Dope), and Kirk Salvador (Society 1) on drums.

Praga and Oliver have also performed as MNO and Digital Orgasm, with a less sex-based and more rave-influenced sound, appeared under the name The Immortals for their work on Mortal Kombat The Album (based on the video game Mortal Kombat), as well as their industrial metal project Tattoo of Pain.

Heaven Is An Orgasm