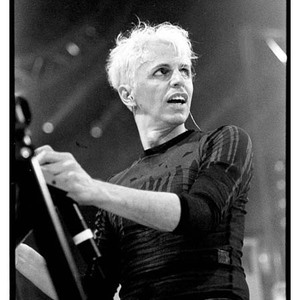 Praga Khan (aka Maurice Joseph Francois Engelen) is an early Techno musician from Belgium. His Belgian New Beat style stems back to the late 80s when Techno came out of the Belgian underground. The Belgian studio wizard is responsible for some of the most important and most recognized rave tracks of the late 80s and early 90s, under his own name and several of his band names (Lords Of Acid, Digital Orgasm, Channel X). In 1988 recording / producing the anthem "Acid in the House" with singer Miss Nicky Trax.

In 1991, Praga Khan met Oliver Adams and along with Jade 4U, formed the production team MNO (comprised of the first letter of their forenames). Shortly after, they produced a series of popular British rave hits. The most popular, "Injected With A Poison", which hit the #16 spot in the UK and #1 in Japan.

While taking a break from his several side projects, Praga Khan released his first studio album, "Conquers Your Love", in 1996. Several albums followed a little while later; Pragamatic in 1998, Twenty First Century Skin in 1999, Mutant Funk in 2000, Mixed Up in 2001 and Freakazoidz in 2002.

A lucky break also happened when Paul Verhoeven, during the shooting of Basic Instinct, walked into "The Limelight" disco in New York, looking for a song for his movie. When the track "Rave the Rhythm" was played, he stepped up to the DJ and asked who that was. The song was included on the soundtrack, after which a whole bunch of other movies followed including Sliver, Virtuosity, Strange Days, Bad Lieutenant and Austin Powers: The Spy Who Shagged Me.

Praga Khan also worked on the soundtrack for the first Mortal Kombat game and the first movie's popular "Techno Syndrome" (the de facto Mortal Kombat theme) under the moniker "The Immortals"; thus also responsible for the camp classic line from the Sub-Zero theme, "Chinese ninja warrior, with your heart so cold..."

Contribution to the theatrical scene was made with his musical collaborations in The Next Dimension (2005) and Code Red.

Injected With A Poison (EP)