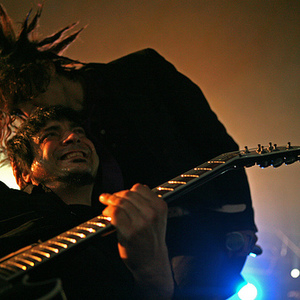 Another large influence in the band's music comes from early 1980s culture. Frequently the music contains samples of early 80's hip-hop or rock, as well as Atari-style beeps and tones. Their second album as a band, 1999's Tight, was even allegedly mixed on Atari equipment. Many of Urine's dress styles consist of the juxtaposition of popular 1980s clothing or bastardized versions thereof.

Later in 1999, MSI launched the album Frankenstein Girls Will Seem Strangely Sexy, featuring 30 tracks that were sorted alphabetically. Kitty (Drummer) designed and ran the official site of MSI when the album came out.

After Frankenstein Girls Will Seem Strangely Sexy , Vanessa YT (Bass player) decided to leave MSI to start a family. Her replacement in the band was Lyn-Z (Bass player), who married My Chemical Romance's lead singer Gerard Way in September 2007.

Mindless Self Indulgence is distinguished from mainstream punk, however, by their incorporating lyrics about being gay and related topics into nearly all of their songs - even titling one of their songs Faggot. Also, Euringer and Steve, Righ? (Guitarist) possess wide vocal ranges, stretching from tenor to high falsetto. The band also has no qualms about using words deemed offensive by some, such as nigga (Jimmy Urine argues that he doesn't say the word out of anger, and often it is more or less used in the sense that it is used in the hip-hop world), and faggot heavily in many of their songs. Many critics have used their word choice to dismiss the band as juvenile.

And although this may be the case, with some songs being of a 'juvenile' subject and tone, they also use clever lyrics and stance to give meaning to songs, such as You'll rebel to anything, which is a song that talks about how punk culture is being exploited by misdirected youths as a way to be unique or get noticed.

In keeping with their confrontational posture, Euringer has been arrested for pulling his penis out of his pants and attempting to set his pubic hair on fire, allegedly succeeding on one such occasion. Other notable stage antics include him drinking his own urine, inviting audience members to punch him in the face and/or throw objects at him, making out with both genders during the show, and roaming through the audience after the set blaring hip-hop music from a boom box perched on his shoulder.

The band's energetic live shows have gained them much recognition. The band is known to stay after the show has finished, signing whatever fans want until not one person is left wanting an autograph. They also take photographs with all desiring fans. They have opened for a number of popular bands, including System of a Down, Korn, Staind, Sum 41, Mushroomhead, Insane Clown Posse, My Chemical Romance, and Rammstein. They have also played many large musical festivals including Voodoo Music Experience in New Orleans in October of 2003 (and in Memphis, TN after Hurricane Katrina in 2006), as well as headlining the Mojave tent at the 2004 Coachella Festival, and the main stage of 2007's Give It A Name. They also headlined the second stage of the Projekt Revolution tour in Summer 2007.

Their DVD, called Our Pain, Your Gain, was released on September 11, 2007, featuring one of their concerts in New York.

On 29th April 2008, their 4th studio album, If, was released. The standard edition contains 15 tracks, the deluxe edition has the same tracklist and a bonus DVD. The Clean version has 16 tracks, Uncle being the additional track. The International edition (UK version) has 21 tracks; 3S as bonus track and four Never Wanted To Dance remixes.

You'll Rebel to Anything