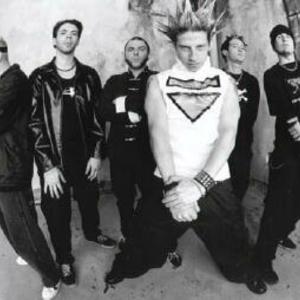 GROOVENICS have tapped into a unique hybrid of sound being heralded by the press as "the future of heavy music as we know it". That's a lot to live up to, but sure enough, on their their self-titled Spitfire debut, they do just that. Groovenics have created their own very unique and distinctive sound, with guaranteed appeal to fans of such acts as Incubus, Deftones, Mr. Bungle and Papa Roach. Their amazing debut stands proudly as a sonic monument of musical virtuosity, diversity and seamless innovation.

Groovenics have created their own very unique and distinctive sound, with guaranteed appeal to fans of such acts as Incubus, Deftones, Mr. Bungle and Papa Roach. Their amazing debut stands proudly as a sonic monument of musical virtuosity, diversity and seamless innovation. Groovenics are equally adept at decimating listeners with a blazing primal fury or lulling them into a melodic groove, with plenty of unexpected detours of musical exploration along the way.

The band's break up Message:
we did in fact break up in sept '03 but i thought it would be cool to throw this up so i have a way of keeping in touch with all you & vice versa. let you know what i'm upto & what some of the other members are doing as well. groovenics was a big part of my life from when mike & i started out in high school up till the end of 2003 (ten fuckin' years good lord!) - so many of you out there i consider friends & family. so raise a drink in honor of ten years of fun, misery, blood, record deals gone wrong, shithead management & some of the best times we ever had. thanks, pete

* anyone else got any other good ones i'm missing? i know there's a 100 ska bands i'm missing here..

groovenics were also featured on the flagship game for x-box's "project gotham" with the song "teach me". they've yet to call for the x-box 360* but they will... what's the matter x-box? can't call somebody back? one night over and that's it? suddenly your phone goes straight to the answering machine?
"teach me" is also heard every friday on real radio 94.3's the love doctors as a rejoiner. a small but personal goal as a kid and very cool to hear still going.

SO WHAT'S NEW?! for more info on pete & mike's band "the sloppy high-fives" go to www.myspace.com/thesloppyhighfives... jim austin is singing for a new band called "borealis"... you can get info on matt swig's photography & getting photos done by simply looking under our friend list & clickin' away on it... josh mullenix still dj's (dj joshua atom) weekly over at kashmir in lake worth.. i don't know where the hell everyone else but we're all over the place so keep your ear to the tracks for what's goin' on folks... i think our merch guy juiceman is the only one who ended up with a real job!

The singer of Groovenics now sings for Suicide City: http://www.last.fm/music/Suicide+City