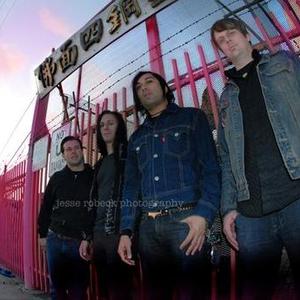 Death Valley High is where gnashing hard rock and death pop converge. On its sophomore album, Doom, In Full Bloom, the San Francisco quartet unleashes a torrent of monstrous riffs and infectious hooks. Releasing digitally in the spring of 2011 and hitting stores in the summer via Minus HEAD Records, Doom, In Full Bloom starts a new season for dark rock ?n' roll. Death Valley High?Reyka Osburn , Adam Bannister , Chris Sanders , and Huffy Hafera ?is about to rip through psyches everywhere.

Death Valley High began formally infecting their local scene in 2006. Reyka had grinded in critical favorites such as Tinfed, Ghostride, and Will Haven for years. A fixture in the tightly knit Northern California music community, Reyka even co-wrote ?Lucky You? for Deftones, featured on the legendary band's gold-selling 2003 self-titled release and The Matrix: Reloaded The Album. Death Valley High was always on his mind though.

Initially formed by Reyka on lead vocals, guitar & synths, the band dropped its debut The Similarities of the Loveless and the Undead in 2007. However, it simply set the stage for Doom, In Full Bloom. The bands second release showcases just how explosive this experience is for the listener.

Reyka elaborates, ?When Adam and I started writing for the album, we had a much more concise direction. The sound was more dance-y. It was more hypnotic. It was more tribal, yet there was underlying melody mixed with our hardcore sensibility. We infused those inspirations as well as our own twists and tricks.?

Those twists and tricks make songs like the first single, ?Multiply,? invasively catchy. Immediately, NorCal radio tastemakers embraced ?Multiply? and began spinning it. In 2010, the song gave fans a first taste of Doom, In Full Bloom. Seguing from a bludgeoning riff into a searing chorus, ?Multiply? stands out as an undead anthem. ?The lyrics are actually about being taken over by a vampire, an alien, or a zombie,? reveals Reyka. ?Pick your monster. It's that feeling of losing yourself to some sort of antibody.?

There's an ere of rebellion at the heart of Doom, In Full Bloom, and it extends across every song from ?She Wants to Kill? to ?Mist & Debris.? Reyka explains, ?The lyrics are always dark. They create a fictitious fantasy that can be related to horror. The idea of Death Valley High is a school that's overturned by all the dark, freak kids, and I really wanted to touch on the pending 2012 theme with Doom, In Full Bloom. There's a lot of imagery of survival, which is the basis for the album.?

Fans can feel that doom up close and personal any time the band plays. Death Valley High has opened for everyone from Powerman 5000 and Jucifer, and their show stands out as chaotically captivating. Adam puts it best, ?It's intense and loud. We come out with an even more energetic sound. We can do shows with metal, pop, or punk bands. It's nice to appeal to different tastes.?

Ultimately, it's about making a lasting impression. Reyka concludes, ?I like to touch on human emotions through that darker perspective. We all go through those feelings, and darker genres exist for that reason. We want to get into somebody's head and not let go.?

With Doom, In Full Bloom, Death Valley High will soon be on everyone's mind. ? Rick Florino

The Similarities Of The Loveless And The Undead