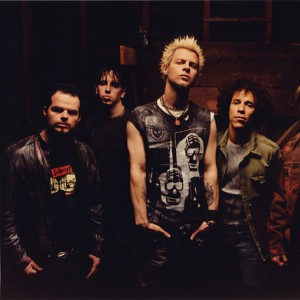 Powerman 5000 is a Boston-based industrial metal/nu metal band formed in 1989. Frontman Spider One (Michael Cummings) is the younger brother of Rob Zombie (Robert Cummings). Lineup includes Spider One (vocals), Evan9 and Velkro (guitar), X51 (bassist), and GFlash (drums). In 1990, Spider dropped out of art school and bought a cheap 4-track home studio and drum machine. Working under the title "MC Spider", he recorded "Much Evil" with producer Lamar Lowder.

In 1990, Spider dropped out of art school and bought a cheap 4-track home studio and drum machine. Working under the title "MC Spider", he recorded "Much Evil" with producer Lamar Lowder. Building on local success, he built a band under the name Powerman 5000. Their style was in the nature of rap/metal that had yet to gain popularity. In 1991, longtime guitarist Adam 12 (Adam Williams) joined the band. In 1994 and 1995, Powerman released two independent records, True Force and The Blood Splat Rating System. Both albums were local successes.

In 1997, the band signed to Dreamworks Records and released a re-recording of The Blood Splat Rating System (with two new tracks) titled Mega!! Kung Fu Radio. The band toured and released singles such as "Organizized" and "Tokyo Vigilante #1". In 1999, Guitarist M.33 (Mike Tempesta) joined the band as they got their biggest break. Creating a strange fusion of science fiction (which had always interested Spider) and "Action Rock" (the term for their own high-energy powerful rock), they released Tonight the Stars Revolt!, which contained the hit singles "When Worlds Collide", "Nobody's Real", and "Supernova Goes Pop". The album sold over a million copies and assured the band's success.

A follow-up album titled "Anyone For Doomsday?" was recorded and a single ("Bombshell") had been released to radio stations, but the album was cancelled just before its scheduled release. Due to being heavily downloaded illegally, Anyone For Doomsday? was later released under Spider's own new label, Megatronic Records, but has since gone out of print due to legal issues. Arguments exist as to whether the record was cancelled due to the events of the September 11th terrorist attacks and the negative title, but the album was finished and scheduled to be released in August of 2001, a full month before the attacks. Spider has said in interviews that the album was dropped because it sounded too much like the previous album and that he wanted to release something fresh and different instead of repeating himself. Conflicts thereafter caused longtime members Dorian 27 (Dorian Heartsong) and Al3 (Allen Pahanish) to leave the band. Ad7 (Adrian Ost) and Siggy Sjursen were brought in to replace them. Ironically, "Bombshell" resurfaced, as the entrance music for the (now-formerly WWE) tag-team wrestlers, The Dudley Boyz.


In 2003, the band released "Transform", a more punk-fuelled album, completely dropping the costumes that had been featured throughout the band's "Tonight The Stars Revolt!" era. Containing the hit singles "Free" and "Action", the album sounded much more live and less filled with industrial metal electronics. After the release of Transform, Dreamworks Records was bought out by Interscope Records, and Powerman 5000 decided not to make the move. Undeterred, Spider continued with his own offshoot label Megatronic Records. In 2005, new music was released, both in the form of a rarities album titled The Good, the Bad, and the Ugly, Vol. 1 and in new music from an upcoming album.

A new tour was also started, but M.33 had left the band and Adam 12, while present on the upcoming album, was not touring. Former Alien Ant Farm guitarist Terry Corso and former Halfcocked (the first band on Spider's label) guitarist Johnny Rock were brought in to round out the live show. The band has recently completed their new album, called "Destroy What You Enjoy". The band has announced that they are signed to DRT Enterainment, who released their album, of which the song "Wild World" is the new single and video.

On May 21, 2007, Powerman 5000 claimed via a MySpace blog post that they will be releasing a new studio album in 2007. The following is taken directly from said post: "Considering the bands track record of putting out cds once every three years it seems hard to believe that, yes we will put out a new disc in 2007!! It's all just beginning to develop and the wheres, whos and whats are to be determined but new rock is on the way!!" However, talk about the record soon simmered, and no new information was released.

Finally, in December 2008, the new track "Super Villain" premiered on the band's Myspace page, showcasing their return to their platinum-selling sound of the late 90s. On January 28, 2009, a preview of tracks from their upcoming 6th studio album were posted on the groups MySpace page, containing clips from the songs "Super Villain", "V is for Vampire", and "Horror Show". Powerman 5000 posted that "Super Villain" would become available for digital purchase on February 10 via iTunes and Amazon.com.

On April 7, 2009, Powerman 5000 released a blog on their MySpace page stating that Anyone For Doomsday? has officially been re-released. The legal battle ended and the album was released under the SKG Music License. The album is available on iTunes as a digital download. On April 21, the band released "V is for Vampire", the second single from their upcoming album, which is planned for a summer release.

On July 7, 2009, Powerman 5000 released a blog on their MySpace page[3] stating that the new album has been finished, and that a release date, track listing, artwork, and additional tour dates was coming soon. On July 27, 2009, Powerman 5000 appeared on Rockline, announcing the title of the new album as "Somewhere on the Other Side of Nowhere". A Tentative release date of October 6 was also announced. Three new songs were also premiered on the show, including "Timebomb", "Make Us Insane", and "Show Me What You Got". On Myspace Spider posted a blog talking about the three new songs filled with comments of the fans liking the music.

On September 6, 2009, Powerman 5000 released the album cover design along with the promotion of their upcoming tour starting on October 24. They also released two new promotional videos on YouTube for their new album, confirming its release date as October 6.

On October 1, the full track "Do Your Thing" was leaked onto YouTube. The song was apparently taken from the Megatronic Records Forum, in which frontman Spider One currently owns. The CD "Somewhere On The Other Side Of Nowhere" was officially released on October 6 in the U.S. and was available in Canada on October 20, two weeks after the reported release date.

The band embarked on a national tour during October and November in support of the album.

On December 7, Spider, the band's lead singer posted links on his Twitter page linking to FearNET.com which is hosting the bands music video for their first single "Super Villain". The video is also available on YouTube and stars Johnathon Schaech as the infamous Super Villain.

Builders of the Future

Somewhere On The Other Side Of Nowhere

Destroy What You Enjoy

The Good, The Bad And The Ugly Vol. 1