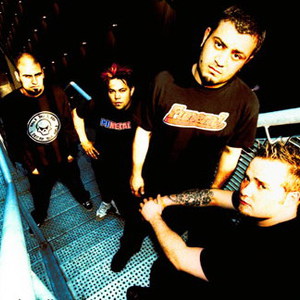 Spineshank is an American Grammy-nominated alternative metal band. Began in February of 1996 in Los Angeles, California, rising from the ashes of a previous band, Basic Enigma (which included future Spineshank members Jonny Santos on vocals, Mike Sarkisyan on guitars, and Tom Decker on drums). Basic Enigma broke up but soon reformed with a different sound and moniker, and a new bassist (Robert Garcia).

Began in February of 1996 in Los Angeles, California, rising from the ashes of a previous band, Basic Enigma (which included future Spineshank members Jonny Santos on vocals, Mike Sarkisyan on guitars, and Tom Decker on drums). Basic Enigma broke up but soon reformed with a different sound and moniker, and a new bassist (Robert Garcia).

The band soon befriended Fear Factory guitarist Dino Cazares, who upon hearing their demo, offered the new band to open a show for F.F. at the Whiskey A-Go-Go in Los Angeles. This led to other coveted opening slots (with such popular acts as Coal Chamber, Snot, Soulfly, Sepultura and Danzig, among others), and label interest, with Roadrunner eventually signing the band. Their debut, Strictly Diesel, was released in September of 1998, and featured yet another tie-in with their favorite band, Fear Factory vocalist Burton C. Bell sings on the track Stain. The Height of Callousness followed two years later. Two singles were released off of this album (as well as became available in video form); Synthetic & New Disease. The band would hold a second stage slot on Ozzfest 2001 for the majority of that summer as well as touring with the likes of Disturbed, (hed) p.e., Orgy& Mudvayne.

2003 saw the release of the much anticipated Self Destructive Pattern, as well as the single Smothered.

After the departure of Jonny Santos in 2004, the remaining members searched for a new vocalist and stated earlier in 2005 they have been working with a new vocalist. No name was given and no other news has been reported since then. Jonny Santos has since re-emerged in a new band dubbed Silent Civilian.

After a very long wait, Spineshank updated their official website (11/7/2005) with news that the band had found a new vocalist in Brandon Espinoza and that they had been working together for a month and had recorded 5 songs during this time. The band goes on to say that their new music is: "still heavy and dynamic with melody, but its a little darker and more raw. Our sound is a little different from what a lot of bands are doing these days and we wont be jumping on any bandwagons to fit in, we're just writing what feels right to us. So far there are no loops or electronics, and no plan to use them any time soon." It also went on to say that the future of the band was very much in doubt, unless they found the ideal replacement for Jonny Santos.

Almost 3 years later, on September 18, 2008, the band issued a press release from their myspace page, stating that the issues that led to the break up have been put behind them and they are working together better than they have before. The band has completed 5 songs since reuniting and plan to write 15 more before recording their new album. One of the new songs, "Born Conform Repent" can be heard at the band's myspace page.

The Best Of Spineshank

The Height of Callousness