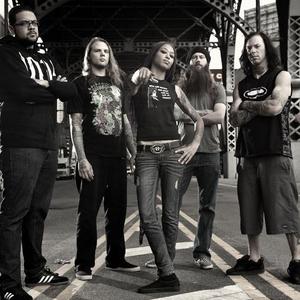 Armed with an unstoppable work ethic and a musical vocabulary that stretches from face-ripping metal to soulful, stratospheric rock, Knoxville, TN, quintet STRAIGHT LINE STITCH are poised to grab heavy music by the horns with their Raging Nation/KOCH Records debut, When Skies Wash Ashore. Though just 11 tracks in length, the album packs more dynamics and diversity than many bands' entire catalogs. Not surprising, then, that the five individuals that make up STRAIGHT LINE STITCH have spent a lifetime honing their craft to reach this point.

Technically speaking, the STRAIGHT LINE STITCH story begins nine years, a handful of lineup changes, and two early releases (a demo EP and album, to be exact) ago. However, to understand the force that is STRAIGHT LINE STITCH today, simply fast-forward to 2003, when vocalist Alexis Brown joined the band. Though without formal training (recent screaming lessons from vocal coach Melissa Cross aside), Brown completed SLS' sound with a multi-octave, multifaceted approach that could be snarling and guttural one moment, angelic and ethereal the next. Making her recorded debut on SLS' second full-length, 2006's self-released To Be Godlike, Brown defied gender and genre alike to emerge as one of the most promising vocalists, period, in modern heavy music.

Despite being followed by a few final lineup shifts, To Be Godlike cemented SLS' core sound and generated a key partnership between the band and Raging Nation Films' Dale ?Rage? Resteghini. The award-winning director -- whose credits include Fall Out Boy, Hatebreed, Mudvayne, Shadows Fall and hundreds of other acts -- helmed the striking 35mm clip for the '07 The Word Made Flesh's ?Remission,? and in 2007, he made SLS the inaugural signing to his newly created KOCH imprint, Raging Nation Records. As When Skies Wash Ashore proves, STRAIGHT LINE STITCH have risen to new heights for their label debut.

Recording When Skies Wash Ashore in the remote village of Millbrook, NY, SLS pushed themselves to the proverbial limit, even as cramped living quarters, geographical isolation, and physically demanding sessions (from Brown's strained vocal cords to her bandmates' strained limbs, the members rose to the challenge) took their toll. ?Unless you're really wealthy, there's not a whole lot to do in Millbrook,? Thacker says of the longtime celebrity-attracting village, ?so we literally ate, slept and breathed this record while we were there. It was the most intense session we ever did, but I feel like we became that much stronger because of it.?

Whether it's in the crushingly brutal metalcore of the official lead track, the neck-snapping thrash ?Black Veil? with it's incredibly powerful video or the next video track ?Taste Of Ashes? (featuring a screaming duet between Brown and SLS fan/Hatebreed frontman Jamey Jasta), the epic, soaring rock of ?Eucharist,? STRAIGHT LINE STITCH's musical strength is undeniable. For every double-bass-pedal assault, death-metal-inspired guitar riff or finger-bending bass line (see the hyperactive ?Adult Cinema?), there's an equally strong hook, texture or atmosphere. And whether she's shredding her throat on a verse or hitting a soulful melody at the chorus, Brown keeps SLS' songs grounded in enough raw emotion to cause goose bumps in even the most jaded listener. ?My songs come from a really personal place,? says Brown, who's as likely to draw inspiration from spirituality as she is from classic horror movies. ?I'm pretty soft-spoken in real life, so this is the one outlet I have to let out everything I'm feeling.?

Of course, SLS' studio performance is just half the story: Averaging some 200 shows per year since 2003, the band have shared stages with national heavyweights such as Slayer, Anthrax, Staind, Mastodon, Chevelle, Killswitch Engage and 3 Inches Of Blood, in addition to rocking the Atlanta stop of the 2005 Vans Warped Tour and multiple J?germeister Music Tour dates (J?germeister is a proud SLS sponsor). More recently, a run of shows supporting DevilDriver, Napalm Death and 36 Crazyfists on the 2008 ?Bound By The Road? Tour found SLS winning over some of their biggest nightly audiences ever, while subsequent Headlining club dates with the Autumn Offering and the Destro saw them diving back into the underground where they cut their teeth.

No matter what size the stage, though, STRAIGHT LINE STITCH have the presence and drive to make it theirs -- and, as When Skies Wash Ashore makes punishingly clear, they also have the musical muscle to win over any audience within earshot. ?When you get down to it, we're a really personal band,? concludes Thacker, ?and as far as I'm concerned, that should be the same whether you're watching us in front of 5,000 people or coming up to talk to us after a show. In the end, that one-on-one connection is all that matters.?

The Fight Of Our Lives

The Word Made Flesh

Everything Is Nothing By Itself