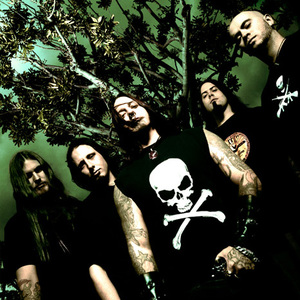 DevilDriver is a groove metal band from California, United States that formed in 2002. The group was started by Dez Fafara, formerly of the band Coal Chamber, as a result of frustrations stemming from the more mainstream direction his former band mates were attempting to take their music. After the demise of Coal Chamber, DevilDriver became his main focus. Their debut album, the self-titled "DevilDriver", was released on October 23, 2003 under Roadrunner Records.

Their second album, "The Fury of Our Maker's Hand", was released in 2005 and was generally well-received by fans and critics alike, even garnering a 4K review from renowned rock magazine Kerrang. The band went on numerous tours in support of the album, including stops in the USA, Europe, and Australia in support of Fear Factory, as well as the Burning Daylight Tour, their first headlining.

On October 31, 2006, DevilDriver re-released their 2005 album "The Fury of Our Makers Hand" with three additional studio tracks and three live recordings of previously released material. The special edition also contains a DVD of all of their music videos to date.

A devil driver is the name witches(especially Italian) give to the bells they use to drive evil away when they are casting their spells. For lead singer Dez Fafara, music has always been a devil driver of sorts - allowing him to drive away all of the demons of his world with a bellowing howl that is distinctively his. Ten years long and ten years strong, his assault on music has created a sound that remains both remarkably resonant and pertinent in today's metal world. DevilDriver's second album, The Fury Of Our Maker's Hand, produced by Colin Richardson, sees Fafara and the band reaching well beyond the rock solid foundation of their self-titled debut and scaling all new sonic precipices.

While most bands mature from their debut to their follow-up, DevilDriver did so by growing tighter as unit and enabling every member of the band to add to the musical sound of the band. Like many bands before them, DevilDriver went through a number of transitions during this period, and rather than finding those changes to be creatively constrictive, they allowed the band to grow as a creative unit. A true collaborative effort, The Fury of Our Maker's Hand was built riff by riff, song by song, by Jeff Kendrick & Mike Spreitzer (guitar), Jon Miller (bass) and John Boecklin (drums). "This band is amazing", says Fafara. "They all strapped on guitars and really came together around my musical vision." Together they created an album whose sonic breadth is truly a testament to their collaborative effort. There's more melody, more hooks, more solos. There's more symbiosis in the band. Everyone is playing together really well. Songs like "End of the Line" and "Driving Down The Darkness" are unrelenting compositions of equal parts speed and fury, showing what team-work can actually accomplish, taking DevilDriver's sound into the red. "Sin & Sacrifice" is an opus in the truest metal sense with a DevilDriver twist, starting off with an eerie orchestral intro and slowly building into wave after wave of menacing metal madness. "Hold Back The Day", the first single from Fury, combines the old with the new, simultaneously harkening back to their debut album while clearly reaching into new and fresh directions. "The songs are all separate from each other, but they've also got that grindy groove sound that only we can capture", says Fafara. "We've got our own sound and that's what we set out to do." Not only has the bands' music matured, but Fafara's lyrics have done so as well. Gone are the days of free-floating, non-linear vocal lines that have become Fafara's trademark of sorts, rather Fury finds Fafara tackling issues and telling stories in a more traditional lyrical sense. "Before you had to try and figure out what I was saying in my lyrics. On the new album I'm trying to be more of a storyteller." While DevilDriver was laced with some of Fafara's familiar cadences, The Fury of Our Maker's Hand finds him breaking free and redirecting his sound in line with that of this band. Fafara looks back with respect on his Coal Chamber days, but DevilDriver is the realization of all his true musical aspirations. "The influence to start this band was that I wanted to do something that was heavier, darker and full of more of my metal influences that I listen to on a daily basis. Every time I get on stage, I want to feel the music behind me. That is DevilDriver."
Born out of frustration with his former band, cultivated through numerous barbecues and free-flowing red wine and solidified through a near-death experience in an RV, DevilDriver is not Dez Fafara and crew rather it is a hard-as-nails metallic maelstrom that pounds out some of the most vicious music heard on the metal landscape today. A balancing act of contorted melody lines, jagged guitars and staccato double bass drumming, "The Fury of Our Maker's Hand" delivers a uniquely sinister sound. An uncompromising tirade on all that is wrong in the world and all that is right in metal, it delivers a resounding F*CK YOU to the world at large. Joined by his band and fueled by perseverance it's good to see that after 10 years Dez Fafara's middle finger is bigger than ever.

Dealing with Demons I

Head On To Heartache

The Fury Of Our Maker's Hand