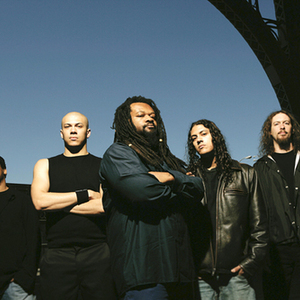 God Forbid is a metalcore band from New Brunswick, New Jersey that was formed in 1998. Their style is different than the styles presented by other, popular metalcore bands: God Forbid's influences are deep-rooted in thrash metal. Building up a following in the late 1990s by touring with bands such as Cradle of Filth, Nile, and Candiria, their first full album Reject the Sickness was released by 9 Volt Records in 1999.

This album received heavy rotation from WSOU-FM in the New York City area, and the band was subsequently signed to Century Media Records, releasing the album Determination in 2001. They played on the MTV2 Headbanger's Ball tour with Killswitch Engage, Shadows Fall, and Lamb of God. In 2004, they released Gone Forever, which helped increase their status considerably. They supported Machine Head along with Caliban in Nov/Dec of 2004 in the UK. The next year, they released IV: Constitution of Treason, a concept album about the end of the world. In 2005-2006 they supported Trivium on their UK tour along with Mendeed & Bloodsimple.

In 2009, they released a brand-new album, Earthsblood. To promote this album, they went on a tour with August Burns Red, DevilDriver and Anthrax.