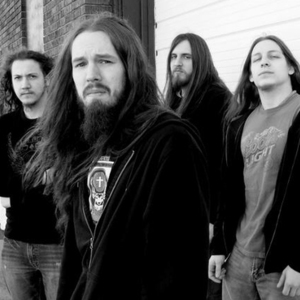 Lazarus A.D. is an American thrash metal band that formed in the frozen tundra of southeastern Wisconsin in the spring of 2005. Dan Gapen (guitars/vocals), Jeff Paulick (bass/lead vocals), Alex Lackner (guitars), and Ryan Shutler (drums), redefine the phrase ?alcoholism and aggression? in music. They subject metal heads to furious nights of head banging while drinking venues dry. Have no doubts that Lazarus A.D.

is a thrash band, but merely in attitude as their sound is no simple throwback to the 80s bay area sound. They breathe a breath of fresh air into modern thrash with intelligent, memorable riffs, mid-tempo grooves, and high-flying solos.

In a few short years, Lazarus A.D. has accomplished more than they ever expected. In the small city of Kenosha, WI, the fire began to spread quickly. Fueled only by a free three song demo, the guys played as much as possible and landed a big break in the summer of 2006 when they had the honor of being direct support for the legendary Anthrax in Milwaukee. They continued to tour the midwest throughout the summer and fall and finally began work on their first full length album in January of 2007. Recorded and engineered by Chris Djuricic (Soil, November's Doom, Michael Angelo Batio) at Studio One, and mastered by James Murphy (ex Death, Testament), The Onslaught was a force to be reckoned with. The band hit the road again and stretched out as far as Denver, CO. The buzz about their live performances continued to grow. It wasn't long before Lazarus A.D. was approached by Earache Records for an upcoming metal compilation. Last Breath was one of the 16 songs chosen to appear on Thrashing Like A Maniac, and they were the only unsigned band on the entire compilation!

In the spring of 2008, Lazarus A.D. received a call from Metal Blade Records, and a short time later, their deal had been inked. The Onslaught was remixed by James Murphy and is set to finally see a worldwide release through Metal Blade Records. The future has never been brighter for Lazarus A.D. and plans for vigorous touring are already in the works, as well as the opening slot for Testament in Milwaukee on August 1st, 2008! Expect to hear the name Lazarus A.D. a lot more in the coming months, and as always, be sure to THRASH OR DIE!