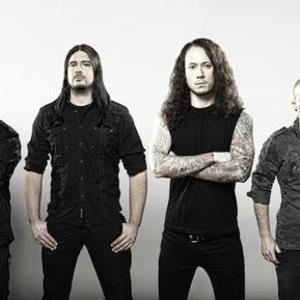 Trivium is an American heavy metal band from Orlando, Florida, formed in 1999. Signed to Roadrunner Records, the band has released five studio albums, eleven singles, and twelve music videos. Their latest album, In Waves was released on August 9, 2011. Trivium cross multiple heavy metal genres such as metalcore, thrash metal, progressive metal, alternative metal, groove metal, and death metal. Their style has evolved over the years from their earliest work on Ember to Inferno right through to In Waves.

Trivium cross multiple heavy metal genres such as metalcore, thrash metal, progressive metal, alternative metal, groove metal, and death metal. Their style has evolved over the years from their earliest work on Ember to Inferno right through to In Waves. There is a clear thrash influence from Metallica and Machine Head, as well as some early In Flames. Trivium has stated that in general they are influenced by musical groups such as Metallica, Machine Head, and Iron Maiden.

At his Lake Brantley High School talent show, frontman Matt Heafy performed a cover version of "Self Esteem" by The Offspring. Vocalist Brad Lewter noticed Heafy and asked him to try out for his band. The pair went over to drummer Travis Smith's house where they played Metallica's "For Whom the Bell Tolls". Impressed with Heafy's performance, they accepted him into the band known as Trivium. After several shows at bars and local clubs, Lewter quit the band and Heafy took over his position as vocalist. In early 2003, Trivium went into the recording studio to record its first high-quality demo disc. A copy of the demo was heard by German label Lifeforce, who signed Trivium. The band entered a studio to record its debut album, Ember to Inferno.
As time went on, Corey Beaulieu joined. In 2004, Paolo Gregoletto joined as the band's bassist to replace Brent Young, before a tour with Machine Head. The album Ember To Inferno managed to garner the interest of Roadrunner Records representatives, who later signed Trivium to a record deal. They then began writing songs for their major label debut.

In 2004, Trivium recorded its second album, Ascendancy, in Audiohammer Studios and Morrisound Recording in Florida. Produced by Heafy and Jason Suecof, the album was released in March 2005. The album debuted at #151 on the Billboard 200 and at #4 on the Top Heatseekers chart. Allmusic reviewer Johnny Loftus stated on Ascendancy, Trivium are a "ridiculously tight quartet, unleashing thrilling dual guitar passages and pummeling kick drum gallops as surely as they do melodic breaks and vicious throat screams" and Rod Smith of Decibel magazine praised "Smith's impeccably articulated beats, bassist Paolo Gregoletto's contained thunder, and, especially, Heafy and guitarist Corey Beaulieu's liquid twin leads." The album was also recognized as the "Album of the Year" by Kerrang! magazine. Later in 2007 the band received their first Gold Record in the UK for more than 100,000 Sales.

In April 2006, after a headlining tour featuring Mendeed and God Forbid as openers, Trivium entered the studio with Suecof and Heafy producing again. The band played the Download Festival again, this time on the main stage with Korn and Metallica. Trivium released The Crusade in October 2006. Debuting at number 25 on the Billboard 200, the album sold over 32,000 copies in its first week of sales. The album was a critical success, with Andy Greene of Rolling Stone claiming "Nothing mars a good metal record like so-called harsh vocals"and Don Kaye of Blabbermouth.net stating The Crusade "is one of the best metal releases of 2006 and quite possibly the heavy music album of the year." On The Crusade, Heafy's vocals changed from the metalcore scream that was featured on the band's previous albums, to more singing on this album. This new singing style, along with the band's thrash metal music were criticised of sounding too much like Metallica, who was a major influence on the band.

Trivium started working on a new album with producer Nick Raskulinecz in October 2007. Heafy stated he wanted to bring back the screaming that was found on Ascendancy. The band stated they did not choose to work with Suecof again because they already recorded three albums with him and they wanted to explore new ideas. Recording ended June 2008. In an interview with the UK's Metal Hammer magazine in May 2008, Matt Heafy stated that their new album was to have "more thrash influences, more screaming and more raptors. Possibly more screaming because of the raptors." He told Revolver magazine, "For the first time, we can't look at our songs and say who the riffs sound like. We're really making our own stuff and our own kind of music and art form, and that's exciting." In September 2008, Trivium released their fourth full-length album,Shogun. The album sold 24,000 copies in the United States in its first week of release, and debut at number 23 on the Billboard 200 chart as well as Number 1 in the UK Rock Album Charts.

In Waves was released on August 2011 worldwide, and has received mixed reaction from both fans and critics. Kerrang! described the album as "draws from the band's entire repertoire and shapes what it finds into a defining and definitive set". A special edition was released featuring the tracks: "Ensnare the Sun", "A Grey So Dark", "Drowning in Slow Motion", "Slave New World" cover and the single from the God of War III soundtrack "Shattering the Skies Above".

In March of 2012, Trivium bassist Paolo Gregoletto told Aussie magazine "Loud", ?I think it's going to be heavier. We've been talking about it a lot, just a lot of stuff, like where we want to go with the next record. I think we've definitely learnt to write better on the road and we're learning that writing with a more focused vision musically is the way to go. Not just all of us just writing as many songs as we can. I think we're all trying to be conscious of how much we're writing, what we're writing and really just spending the time with a smaller batch of songs, rather than writing like 40 songs and kinda being all over the place musically. But it's definitely I think going to be a heavier record.

?I mean, the last record, we had so much time; we had like two years and we wrote an album over the course of two drummers, so it was like, when we started writing we were in a different headspace than when we actually recorded. So we had a lot of material, which was great. But I think now that things have smoothed out on the personal side of things for the band, I think we can focus solely on just the musical vision of what Trivium is and really have no, outside of the musical stuff we have nothing going on that's kinda like drawing from that."
Trivium participated in a co-headlining trek with Swedish melodic death metal band In Flames in both Europe and North America. European support will come from Ghost and Rise To Remain and North American support will come from Veil Of Maya and Kyng. They are confirmed to perform at the Metaltown Festival in June 2012.

In The Court Of The Dragon

In The Court Of The Dragon (CDS)

What The Dead Men Say

Drowning In The Sound (CDS)

The Sin And The Sentence

The Heart From Your Hate (CDS)