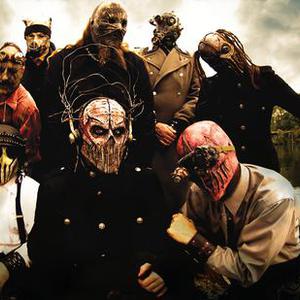 Mushroomhead is an industrial metal outfit that emerged in the 1990s. Mushroomhead's forceful yet melodic alternative metal incorporates elements of hip-hop, as well as industrial metal. Formed by drummer Skinny in 1993, Mushroomhead was originally a side-project for members of other Cleveland bands. They played their first show on October 22nd of that year. The members wore a variety of masks to hide their identity and for theatrical impact.

Formed by drummer Skinny in 1993, Mushroomhead was originally a side-project for members of other Cleveland bands. They played their first show on October 22nd of that year. The members wore a variety of masks to hide their identity and for theatrical impact. One of the vocalists, J Mann, eventually stopped wearing a mask and just put white make-up on his face with black make-up on his mouth and around his eyes, similar to make-up worn in the movie Dead Presidents.

Mushroomhead quickly became one of Cleveland's top local acts and developed a devoted fanbase. Mushroomhead's self-titled debut album was released independently in 1995, followed by Superbuick in 1996 and M3 in 1999. Over the course of those 3 albums the band had several line-up changes: Bassist Mr Murdernickel was replaced by Pig Benis after the first album, female dancer Roxy left, guitarist Dinner was replaced by Gravy, male dancer Bronson went to playing samples and then took over as 2nd Guitarist when J.J. Righteous left. During this time Mushroomhead was the #1 underground band in Cleveland.

Roadrunner Records approached Mushroomhead with a record contract which they declined. The band eventually got signed to Eclipse Records in 2000, and their next album, XX (a "best of" compilation), came out the following year. In 2001, Mushroomhead's members included drummer/founder Skinny, lead vocalists J. Mann and Jeffrey Nothing, guitarists Bronson and Gravy, keyboardist Shmotz, bassist Pig Benis, and sample provider Stitch when they signed to Universal Records to re-release XX. During this time Jeffrey Nothing also ditched his trademark goat / devil masks in favor of face paint.

Their first proper effort for the label was 2003's dynamic XIII, but the band soon parted ways with not only Universal, but also vocalist J. Mann during a subsequent tour. Undeterred, Mushroomhead pressed on with their D.I.Y. ethos intact and welcomed new frontman Waylon, formerly of 3 Quarters Dead, into the fray. Second guitarist Bronson would depart not long after Waylon's entry, leaving to study in film school. The DVD Mushroomhead, Volume 1 followed in mid-2005 before the guys returned in September 2006 with Savior Sorrow, released through New York-based indie Megaforce Records.

Mushroomhead released another DVD titled Volume 2 on October 28th 2008 and the band has stated that there will be a new album in 2010.

Since 1999, Mushroomhead has had an on-and-off rivalry with Iowa-based band Slipknot. The feud erupted due to the image similarities between the bands. Many fans of Mushroomhead claim Slipknot stole their 'masked' look, and vice-versa. In an interview with Soundbites, then lead singer of Mushroomhead Jason Popson stated, "It seems a little strange, because they look so much like us and they have the same number of members and some of the same masks, and it was a little too strange that their record label had all of our material. I think it's obvious that they borrowed material from our show."

An incident between Mushroomhead fans and Slipknot themselves occurred when Slipknot trekked to Cleveland as part of their tour in support of their debut album. Mushroomhead fans flocked to the concert and peppered Slipknot with batteries, rocks, bottles of piss, etc., forcing them off-stage. In a press conference, Slipknot lead singer Corey Taylor stated that members of Mushroomhead had encouraged fans to do these acts. However, Mushroomhead has publicly stated that the band in no way encourages this sort of behavior, nor were any band members even at the show where the incident took place.

In a May 2007 interview it Imhotep.com, singer Jeffrey Nothing stated that the day after the Cleveland incident, his then girlfriend went down to the venue and the members of Slipknot and some of their crew harassed her saying: "You're wearing a Mushroomhead shirt, what do you know?" And they said it was our idea that you stole and now you are mocking us that we stole this masked-looking from you?, "The bottom line is: here is our city, our fans support us completely! They felt just as fucked over by these puny 'Clowns' as us and they aren't afraid to show it. "Welcome to Cleveland bitches." In 2005 Mushroomhead dressed as Slipknot for three shows in the northeast Ohio area, avidly mocking the band.

Mushroomhead's 2006 Midnight Halloween performance started with an announcement over the PA: ?Due to unforeseen circumstances, Slipknot will not be appearing tonight,? which was greeted by chants of ?Fuck Slipknot!? from the sold-out Agora Theatre. Soon after, the lights came up, revealing their Nightmare Before Christmas-themed set, complete with falling snow. St1tch and Little Dan (Skinny's drum tech and drummer for Ventana) came out wearing masks from two members of Slipknot. Dan wearing Chris Fehn's mask with the Pinocchio-style nose, Stitch wearing Shawn ?Clown? Crahan's mask.

The Righteous & The Butterfly (Deluxe Edition)

The Righteous & The Butterfly