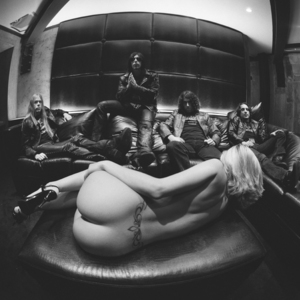 Monster Magnet is an American stoner metal/stoner rock band. Hailing from Red Bank, New Jersey, the group was founded by Dave Wyndorf (vocals and guitar), John McBain (guitar), Tom Diello (drums), and Tim Cronin (vocals and bass). The band first went under the name "Dog of Mystery" and later "Airport 75", before finally settling on "Monster Magnet". In 1989, Monster Magnet released two demo cassettes; "Forget About Life, I'm High on Dope" and "I'm Stoned, What Ya Gonna Do About It?". The band's first 'official' release was a self-titled EP from Glitterhouse Records of Germany.

In 1989, Monster Magnet released two demo cassettes; "Forget About Life, I'm High on Dope" and "I'm Stoned, What Ya Gonna Do About It?". The band's first 'official' release was a self-titled EP from Glitterhouse Records of Germany. In 1991 the band signed with Caroline Records and released their first full length album, the cult classic Spine of God, in 1991. The next release was a bizarre 4 song EP titled Tab which included, among two other marathon length songs, a 32 minute track called "Tab...". McBain was fired soon after, due to personality conflicts between himself and Dave Wyndorf. He was replaced by Atomic Bitchwax guitarist Ed Mundell; who holds the position to this day.

The year 1993 saw the release of the album Superjudge. While the album was released on major record label (A&M Records) and is considered a cult favorite among fans of the band's earlier work, the album did not sell very well. The follow-up, a more pop-influenced album, was Dopes to Infinity had a hit single in "Negasonic Teenage Warhead" but still did only slightly better than Superjudge. Wyndorf moved to Las Vegas, Nevada in order to begin working on Powertrip (1998), a breakthrough hit that earned a gold certification. Powertrip saw the band departing from its usual lo-fi, stoner rock fare, and enter into an era with more guitar and heavier drum beats. Guitarist Phil Cavaino joined the band in 1998. "Space Lord", the first single, was a major radio hit and the band went on tour with bands like Aerosmith, Metallica and Marilyn Manson. Their last album on A&M Records was God Says No (2000). After this release, Joe Calandra and Jon Kleiman departed the band due to internal conflicts with Wyndorf, and were replaced by Jim Baglino and Bob Pantella respectively. In 2003, Monster Magnet signed to the European label SPV, and in early 2004 released Monolithic Baby! throughout Europe. The U.S. release followed in May on SPV America. In March 2005 Phil Cavaino departed after 7 years service in a split described as amicable by Wyndorf. A followup to Monolithic Baby! was expected in March 2006 to coincide with their European Tour, along with rereleases of Spine of God and Tab, both featuring new artwork and liner notes, however the tour and album release did not go ahead. A DVD is also planned for late 2006.

"The battle with one's inner demons is the most personal fight any of us can undertake. The fight is at times a lonely, confusing journey. On the evening of February 27, Dave Wyndorf suffered a set back in his own fight and was hospitalized due to a drug overdose. His full recovery is expected. We ask that all those he has encountered over the years or simply affected by his music to take a moment to think good thoughts of and for him. With the grace of God and those who love him we are all confident that Dave will rebound from this set back and continue to play and make great rock and roll."

November 5, 2007 a new album came out. That was quite unexpected by the fans because of Dave Wyndorf's overdose and because the site wasnt updated anymore. The album's called 4 way diablo and some songs are inspired about Dave's overdose.

Monster Magnet's style and material are heavily influenced by 1970s-era space rock bands such as Hawkwind and Captain Beyond. In addition to arranging covers such as Hawkwind's "Brainstorm" (Doremi Fasol Latido, 1972), Wyndorf sometimes incorporates elements of space rock staples into his own songs. For instance, the Dopes to Infinity title track borrows some of its lyrics from "Lord of Light" (ibid.), and Superjudge's "Twin Earth" is a reinterpretation of Captain Beyond's "Mesmerization Eclipse" (Captain Beyond, 1972). Monster Magnet's live shows occasionally feature Stacia-esque nude dancers, a fact which has landed them in trouble with the law in some American cities.

Cobras And Fire (The Mastermind Redux)

Milking The Stars: A Re-Imagining Of Last Patrol