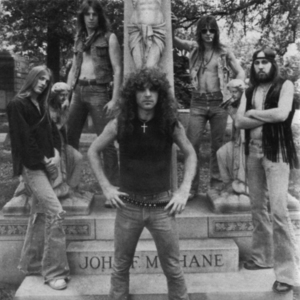 1. An American doom metal band. 2. Rapper from Atlanta Georgia known for his work with Duct Tape Ent. & His Mixtape December 17th. 1. Trouble was formed in Chicago in 1979 by vocalist Eric Wagner, guitarists Bruce Franklin and Rick Wartell bassist Sean McAllister, and drummer Jeff Oly Olson. Drawing deeply from Black Sabbath for inspiration (with occasional nods to the psychedelic sounds of the late '60s thrown in for good measure)...

2. Rapper from Atlanta Georgia known for his work with Duct Tape Ent. & His Mixtape December 17th.

1. Trouble was formed in Chicago in 1979 by vocalist Eric Wagner, guitarists Bruce Franklin and Rick Wartell bassist Sean McAllister, and drummer Jeff Oly Olson. Drawing deeply from Black Sabbath for inspiration (with occasional nods to the psychedelic sounds of the late '60s thrown in for good measure), the band forged an uncompromising brand of classic metal all their own, made more unique by their gloomy down-tuned riffs and spiritual, often mistakenly religious lyrics, which quickly earned them the dubious "white metal" tag. The album and songtitle Run To The Light was thought to be a religious title while it actually came from Eric Wagner watching Poltergeist and writing it down.

The band toured throughout the Midwest during the early '80s before signing with Metal Blade Records and releasing their amazingly mature eponymous debut (later referred to as Psalm 9) in 1984. The equally impressive (and even more depressing) The Skull followed in 1985 and reflected singer Wagner's struggles with substance abuse as well as the growing turmoil within the group. This led to the replacement of bassist McAllister with Ron Holzner and the departure of drummer Olson, who, as legend has it, had decided to become a preacher. Dennis Lesh was drafted as his replacement for 1987's Run to the Light.

A three year hiatus followed. Luckily, just when it seemed that Trouble's fortunes had run out, the band was snapped up by Rick Rubin's visionary Def American Records for whom they recorded another self-titled album (Trouble) in 1990 with Rubin in the producer's chair. More experimental than previous efforts, the album (featuring new drummer Barry Stern) expanded upon the group's tentative psychedelic notions of the past while abandoning none of their thunderous power chords.

Encouraged by an euphoric response from the media, the revitalized group embarked on a year-long tour, expanded their fan base considerably, and returned to the studio with every intention of making their next album the one that would push them over the edge. Sure enough, 1992's stunning Manic Frustration realized all their creative ambitions, delving even deeper into Beatlesque psychedelia and featuring some of Trouble's most aggressive, energetic performances ever. But when the album still failed to connect with a wider audience (due perhaps to the grunge revolution that made metal a bad word in 1992), it seemed that Trouble had apparently missed their last window of opportunity.

Ultimately dropped by their record company (that by now was experiencing financial problems of their own), the band issued 1995's Plastic Green Head through the Music for Nations label. But despite offering consistently strong songwriting that harkened back to their doom roots, and the return of founding drummer Olson, the album's impact was noticeably dulled by a badly concealed weariness. Vocalist Eric Wagner would quit the band soon after (going on to form Lid). So the band fell apart in 1996.

Though Trouble had been on hiatus ever since, rumors of an eventual re-formation persisted. On January 26th of 2002, the event that all Trouble fans worldwide had waited for finally happened. The band took the stage in Chicago to once again pound the planet with their particular brand of doom. Eric, Bruce, Rick, Ron and original drummer, Jeff Olson took to the stage to perform a short blistering set that announced to the world that they were back. Since then the band has been out and about in the greater Chicagoland area playing local one off gigs and headlining various metal festivals while working on their upcoming album.

In February 2004, Dave Grohl of Nirvana and Foo Fighters fame put together a tribute to his metal roots by assembling a who's who of metal with his Probot project. The disc featured various vocalists from Dave's favourite metal bands singing on tunes that he recoded the music for. Eric sang on the track "My Tortured Soul". 2005 bass player Ron left the band and was replaced by Chuck Robinson. In 2006, tragedy befell the Trouble camp when former drummer Barry Stern passed away.

A Live DVD called "Trouble - Live in Stockholm", recorded live in Stockholm 2005, was released in 2006. The new album Simple Mind Condition was set to be released in USA and Europe in late February 2007 and part of their back-catalogue were re-released with extra material (live videos, pictures from the period). The new album has begun showing up in online shops and has leaked onto the internet. The rumoured unplugged CD is being released later in 2007 while Trouble have a busy touring schedule in both USA and Europe this year (2007).

In May, 2008, it was announced that Eric Wagner has left the band and had been replaced by Kory Clarke of Warrior Soul. Olson also announced his departure from the band two months later to continue with his own band, Retro Grave. Olson's last show was at "The End Club" in Nashville, TN on July 19, 2008. He was replaced by Wet Animal's Mark Lira for the band's upcoming U.S. East Coast tour.[8].

In a September 2008 interview with Rock N Roll Experience, guitarist Rick Wartell mentioned that Trouble has written "eight or nine songs" for their next album, and would begin recording it after touring. When asked which direction is the new music going in, Wartell replied, "I know people have said this a million times and I know you've heard this a million times, but it's pretty fucking heavy, let's put it that way! The music end of it that Bruce [Franklin, guitar] and I are writing is getting heavier and heavier...it's getting heavier and then we want Kory to incorporate his style to what we are doing, that's basically all that we really want out of this."

On November 18, 2008, Trouble announced, via their website, that they were in the process of writing songs for an album that would likely be released in the summer of 2009. A live bootleg recording featuring the new line-up was released via the band's website in December, 2008.

Not to be confused with the Boston hardcore band The Trouble Chuck Robinson left the band in 2010.

One For The Road (EP)