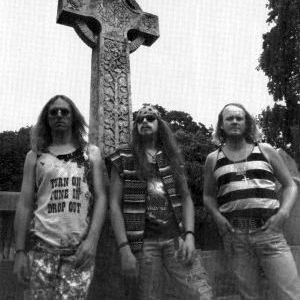 Of the several Black Sabbath-inspired bands on the Hellhound label, Sweden's Count Raven, founded in 1987, was probably the most representative of the classic doom sound for which Hellhound was renowned. After four albums (all pretty similar in style), a deteriorating working relationship between founder Dan Fondelius (vocals, guitar) and the other two members, Tommy Erikkson (bass) and Christer Pettersson (drums) forced the band to fold in March of 1999.

Fondelius went on to form a new band by the name of Doomsday Gouvernment. All of their albums have been re-issued by Cyclone Empire Records in 2006.

Destruction Of The Void