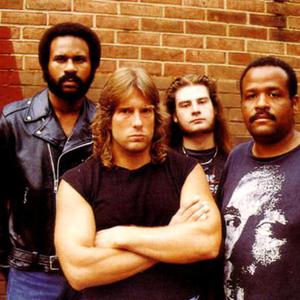 Iron Man evolved from earlier Alfred Morris III projects Force and Rat Salad. In 1988 the band decided to become a Black Sabbath cover band and changed their name to Iron Man. In 1999 the band released their third studio album, ''Generation Void''. Each album has had a new line-up with Morris being the only constant throughout the years. In 2006, a bootleg recording of Iron Man surfaced entitled ''Iron Man: Live in Cincinnati''.

This concert was one of the very few performed on the ill-fated 2000 U.S. Tour. The show was recorded on February 9, 2000 at Annie's Saloon in. It was the last show ever with Dan Michalak & Vic Tomaso.

At the beginning of 2000 Iron Man embarked on a 20 city U.S. tour which ended prematurely with two band members (Michalak and Tomaso) leaving. Temporary bassist ViiX recruited two additional temps (Jared Rein on drums and Jadd of MeteorCity Records founder on vocals) for the tour. She also provided a van for the band to use & did various photography & artwork. They resumed touring up until April 2000. This line up played their last show on April 1, 2000 at the Emerson Theatre in Indianapolis, Indiana.

In 2004 Michael Lindenauer took on the role as their manager and helped Morris to revive Iron Man. Morris had recruited new band members, one of which, Jon Owen, was from London, England. This caused problems when they tried to make their first comeback show on July 9, 2005 at the Templars of Doom Festival held in Indianapolis. Jon Owen was unable to secure a proper visa in time and was going through a series of personal problems as well. It took the combined efforts of both Morris and Lindenauer to put the band back together yet again. Ex-members of Maryland doom bands Wretched (doom band)|Wretched and Life Beyond (Louis Strachan on bass and Gus Basilika on drums) were recruited for the rhythm section. After a long search Lindenauer secure Joe Donnelly of Sabbra Cadabra (a Black Sabbath tribute band). Iron Man was booked for the Doom Or Be Doomed Festival to be held over three days in Baltimore, Maryland on the weekend of April 13-15, 2007. Just a month before the show, Basilika left the band over musical differences. Former Force drummer Brian "Dex" Dexter filled Basilika's spot. With the new line up intact the band finally made their comeback show as planned on April 15 at the D.O.B.D. Festival. Soon after, the band released the self produced CDEP ''Submission''.

In 2007, Leaf Hound Records began re-released the first two albums originally released on Hellhound Records. Both albums have been remastered. ''The Passage'' was re-released on CD. In 2008, ''Black Night'' was released on LP with plans to re-release the CD version in the future. And in 2009, Al Morris III guided yet another new lineup of Iron Man into the studio to record the band's fourth album, ''I Have Returned'', released by Shadow Kingdom Records.

There are two releases on Doom Records that feature Morris. There is a self-titled Force album and ''A Double Dose of Doom'', which features Rat Salad and Obstination (who would go on to become Unorthodox (doom band)|Unorthodox). In 1979, during the early Force years, Larry Brown was offered a spot in the Bad Brains but declined thinking Force was the better prospect. Morris also appears on the ''Scene Killer'' album (2001) on MeteorCity Records, which is a collaboration of musicians from New Jersey bands along with a few out-of-state guests
Former vocalist Rob Levey is now better known for his work in organizing the Stoner Hands of Doom festivals.

On January 15, 2012, Iron Man posted the following announcement on their Facebook page: "Iron Man are happy to announce Jason "Mot" Waldmann as the band's new permanent drummer. Mot, a longtime friend and fan of Iron Man, recently performed with the band in a fill-in basis, and based on his performance and his friendship and chemistry with the band, has been awarded the full-time position. Iron Man graciously thanks everyone who auditioned; the response was huge, and the choice was far from easy. The evidence of the richness of the talent pool regarding drummers within the MD/VA/DC region was evident during these auditions. Everyone, please welcome Mot to the Iron Man family as we look forward to a very successful 2012!"

Iron Man is currently working on their fifth full-length recording and will appear in Ottawa, ON at All That's Heavy II on May 12, 2012.

South Of The Earth