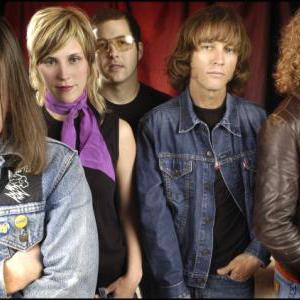 Young Heart Attack formed in 2001 around Austin, TX scene vets Chris Hodge (vocals/guitar), ex-Sixteen Deluxe'ers Chris Smith (guitar; heretofore known as Frenchie) and Steven Hall (bass), and former Fastball drummer Joey Shuffield. Vocalist Jennifer Stephens was also tapped, as a foil to Hodge's barely-contained yell. A round of 7"'s and frequent gigging (including exposure at South by Southwest) hooked the Heart Attack up with a deal on XL, and soon the Texans were rocking European crowds alongside kindred throwbacks like the Darkness and the Datsuns.

The "Misty Rowe" single appeared in autumn 2003, and was followed by more U.K. dates; the full-length XL debut Mouthful of Love dropped domestically in May 2004.