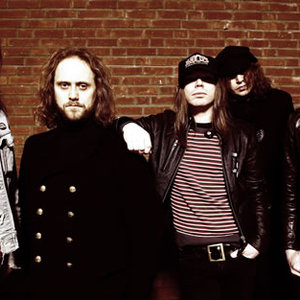 The Swedish rock band The Hellacopters was formed in Stockholm, Sweden in 1994 as a side project by Nicke Andersson (a founding member of the Swedish death metal bands Entombed and Death Breath ), with Dregen (guitar) (who later left the band to concentrate on his other band Backyard Babies), Kenny H&aring;kansson (bass) and Robert Eriksson (drums). Robert Dahlqvist,"Strings"(lead guitar) met the other members while working in a bar and replaced Dregen in 1999. Also in the band is Anders Lindstr&ouml;m(keyboard, tambourine and guitar), better known as Boba.

Their first single 'Killing Allan' was recorded in Dec. 1994 and released in early 1995 on Nicke's own label Psychout Records. The first incarnation of their 2nd & 3rd singles, '1995' (Freak Scene Records) and 'Now/What Are You' (Planet Of Noise Records) respectively, came out during 1996. The Hellacopters eventually signed up with 'White Jazz Records' for the debut album 'Supershitty to the Max', released in June 1996, for which the band was rewarded with the Swedish Grammy.
In april 2008 The Hellacopters released their last album 'Head Off', which contains cover tracks of bands that had influenced the band over the years. The first single was "In the Sign of the Octopus", originally performed by The Robots.
All in all, The Hellacopters have produced 6 albums, a cover album, two compilations of non-album work, a best of album, six EPs, and many other official releases.

The Hellacopters have now split, but they toured Europe and Scandinavia for the last time in the fall of 2008 thereby the name of the tour "The Tour Before The Fall". Doing this, they threw in the towel with a bang. Their last show took place on the 26th of October in Stockholm and was aired live to the world on Myspace.
The world has lost one of the last, real rock bands, but gained one legend more.

Cream Of The Crap! Volume 2

Cream Of The Crap! Volume 1

By the Grace of God

The Devil Stole The Beat From The Lord