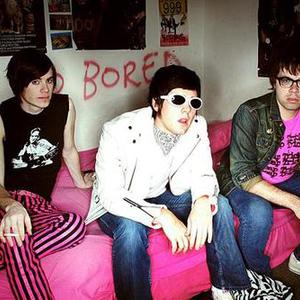 the Pink Spiders is an American power pop band which formed in 2002 in Nashville, Tennessee, United States. The band consists of Matt Friction (lead guitar and vocals), Brandon Jazz (bass) and Bob Ferrari (drums). Former members include John Decious (bass), Nathan Hansen (bass), Josh Watson (guitar), Nick Slack (drums). The Pink Spiders stormed the Nashville music scene in late 2003, and by January of 2004, the band released their first EP, called The Pink Spiders are Taking Over!. They signed with CI Records in the summer of 2004.

The Pink Spiders stormed the Nashville music scene in late 2003, and by January of 2004, the band released their first EP, called The Pink Spiders are Taking Over!. They signed with CI Records in the summer of 2004. A mere three months after their EP was released, several major-label offers were on the table, and, in April of 2005, the band signed with Geffen Records. The Pink Spiders have since been named as one of Alternative Press' "100 Bands you need to know in 2006."

Their third studio album, Sweat It Out, was released on September 23, 2008, after a long wait since the announcement of the CD. The CD hit with it's single "Gimme Chemicals" and soon followed up with a music video shortly after it's release. Before the album's release, founding members John Decious and Bob Ferrari left the band and were replaced by Nathan Hansen (bass), Josh Watson (guitar) and Nick Slack (drums).

On August 31, 2009, Matt Friction posted a blog on his MySpace stating that the band was taking an extended hiatus and that his primary focus on his new band, called Matt Friction & The Cheap Shots.

Towards the end of 2010 the band began to reconnect, the original lineup played a gig together and announced their intent to begin touring again.

On March 22, 2011 the band released their single "Cherry Chapstick" which also contained the song "Sad Style." These are the first songs released since the bands reformation.

The Pink Spiders intend to begin touring again in early April 2011, although Jon Decious has once again left the band and has been replaced by Brandon Jazz.