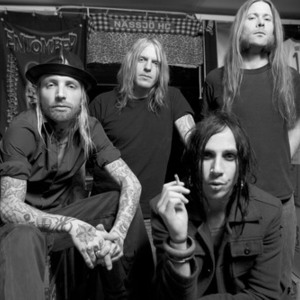 Backyard Babies is a Swedish Rock'n Roll band, formed in the city of N?ssj? in 1987, originally comprising singer Tobbe, guitarist Dregen, bassist Johan Blomquist and drummer Peder Carlsson. After recording a rough demo and playing a few local live dates, in 1989 the group dismissed Tobbe and replaced him with singer Nicke Borg; two more demos followed, as did a national tour, and in 1991 the Backyard Babies launched their first official release, the EP Something to Swallow.

Signing with the Swedish Megarock label in 1993, the following year the quartet issued their first full-length effort, Diesel & Power, before going on hiatus to allow Dregen the chance to work with his other band, The Hellacopters. The Backyard Babies reunited in 1997 for the album Total 13 and later released Making Enemies is Good (2001) and Stockholm Syndrome (2003). In 2006, The Hellacopters singer Nicke Andersson helped produce their fifth studio album People Like People Like People Like Us, this followed by their self titled album Backyard Babies (2008).