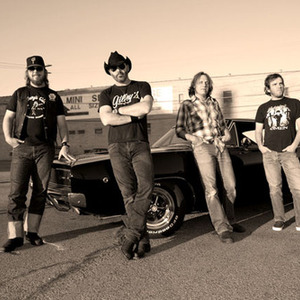 The Supersuckers are an American garage punk band. They are the self-proclaimed "Greatest Rock 'n' Roll Band in the World." Following the relative success of their 1997 foray into country music with the release of Must've Been High, they have also been known to play country shows under various names, including, of course, The Supersuckers. As of April 2005, the members are Eddie Spaghetti on bass and lead vocals along with Rontrose Heathman and Dan "Thunder" Bolton on guitars.

Drummer and original member Dancing Eagle recently parted ways with the band while guitarist Dan "Thunder" Bolton is on temporary hiatus. But now he is back after taking a long needed break from the road. Dusty from Agent Orange handled drums for a bit, but the new, permanent drummer is Scott Churrilla from The Reverend Horton Heat.

The Supersuckers formed in 1988 as The Black Supersuckers in Tucson, AZ. The original line-up was Eddie Spaghetti on bass, Dan "Thunder" Bolton and Rontrose Heathman on guitars, Dancing Eagle on drums, and Eric Martin as the lead singer. In 1989, they moved to Seattle, WA. Here, Eric Martin left the band. The remaining members decided to continue as a four piece with Eddie Spaghetti taking over the vocalist role. They recorded numerous singles for various small labels before being signed to Sub Pop. A sampling of these are collected on the 1992 release The Songs All Sound the Same. Their first album with Sub Pop, The Smoke of Hell, was released in 1992.

In 1995, guitarist Rontrose Heathman temporarily left the band. He was replaced by Rick Sims of the band Didjits for the recording of their third album, The Sacrilicious Sounds of the Supersuckers, and the subsequent tour. He returned for the recording of their fourth album, Must've Been High, which, as their first country album, was a major turning point for the band. Their fifth and final album with Sub Pop was their greatest hits release, 1999's How the Supersuckers Became the Greatest Rock and Roll Band in the World. That same year they released their fifth studio album, The Evil Powers of Rock 'N' Roll.

In 2001, the band formed their own record label, Mid-Fi Recordings. In addition to numerous singles and several live recordings, the band released their sixth studio album, Motherfuckers Be Trippin' on this label. In May of 2005, they released the singles collection Devil's Food.

The Supersuckers latest release is a 2006 EP called Paid.

The Songs All Sound The Same