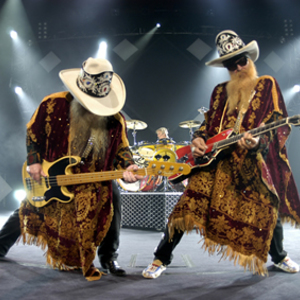 ZZ Top is an American blues rock band, formed in 1969 in Houston, Texas. The band members are Billy Gibbons (vocals and guitar), Dusty Hill (bass guitar and vocals), and Frank Beard (drums). They hold the distinction of being one of the few rock bands still comprised of its original members for over 40 years, and until 2006, with the same manager/producer, Bill Ham. They reached the peak of their commercial success in the 1970s and 1980s, scoring many hit songs during that era; but they remain together today and are still touring and releasing albums.

They reached the peak of their commercial success in the 1970s and 1980s, scoring many hit songs during that era; but they remain together today and are still touring and releasing albums. ZZ Top was inducted into the Rock and Roll Hall of Fame on March 15, 2004. Summarizing their music, Cub Koda wrote, "As genuine roots musicians, they have few peers; Gibbons is one of America's finest blues guitarists working in the arena rock idiom ... while Hill and Beard provide the ultimate rhythm section support."[1] Their song lyrics often feature sexual innuendo and humor.

Nearly as well-known as their music is the group's appearance: Gibbons and Hill are always pictured wearing sunglasses (a nod to their 1979 song "Cheap Sunglasses"), similar (if not matching) clothing, and their trademark chest-length beards, while Beard sports a mustache but not a beard. In 1984, the Gillette Company reportedly offered Gibbons and Hill US$1 million apiece to shave their beards for a television commercial, but they declined.

The origin of the band's name was not officially known for many years. Some theories included: the two brands of rolling paper, Zig-Zag and Top; a tribute to blues legend Z. Z. Hill; Z-shaped barn-door braces Gibbons once saw at a farm; and/or Billy Gibbons seeing the two words running together on a dilapidated bill board. The real origin, as told by Billy Gibbons and also recorded in his new book (Rock + Roll Gearhead), is derived from the name of blues master B.B. King. They wanted to call themselves Z.Z. King but sounded too similar to their blues legend hero. They figured that "King" was at the "top" so thus settled on ZZ Top.

The men who would form ZZ Top had played in several different Texas-based groups (including the Moving Sidewalks, The Cellar Dwellers, The Hustlers, The Warlocks and American Blues) before joining forces in late 1969.

They toured almost continually for several years, but first gained wide acclaim with their third album, Tres Hombres (1973). It contained the classic song "La Grange", referencing the bordello that is the subject of the musical The Best Little Whorehouse in Texas.

The band continued touring, recording, and releasing albums until 1977, when they took an extended hiatus. Their long-time manager/producer/image maker Bill Ham used this time to negotiate a deal that allowed the band to keep control of their previous recordings, which would be distributed by their new label, Warner Brothers. They reunited two and a half years later in order to start recording under that new Warner Brothers contract. Unbeknown to the other, both Hill and Gibbons had grown the chest-length beards that quickly became a part of their "wildman" image.

They reached new heights of popularity with the 1983 album Eliminator, boosted to prominence by memorable music videos for the tracks "Gimme All Your Lovin'", "Legs" and "Sharp-Dressed Man" each of which featured a small bright red Ford '34 3 window hotrod called The Eliminator and a trio of mysterious, beautiful women who travel around helping various people. The album also featured a distinctive synthesizer-laced sound--a rarity in the blues rock genre--which added a modern, new wave edge to the music, and helped the album become successful. Eliminator remains their most successful album to date.

Their next album, Afterburner, mostly featured the same blend of synthesizers, sequencers and blues rock. Some critics have expressed frustration at this approach. But on subsequent albums, less and less synth- and synchronizer-influenced music is heard. An occasional song with those elements and instruments is included on recent albums as a nod to their past.

In 1994, ZZ Top signed a five-disc deal with RCA Record. Many fans (or, as they refer to themselves, "fanzz") feel that the recordings of this era are as artistically strong as the earlier London and Warner Brothers recordings, but have expressed disappointment with RCA's promotion of these releases. On several occasions Billy Gibbons was overheard refering to the execs at RCA as "a bunch of cock suckers".

In July 2000, while on tour in Europe, Hill was diagnosed with Hepatitis C, which forced the cancellation of several dates in that tour. Hill has since made a remarkable recovery, joking, "You just can't keep down ZZ Top!"

In 2003, a comprehensive collection of recordings from the London and Warner Brother years entitled "Chrome, Smoke & BBQ" was released.

As of 2006, it is reported that ZZ Top is recording their 15th studio album.

Live - Greatest Hits From Around The World