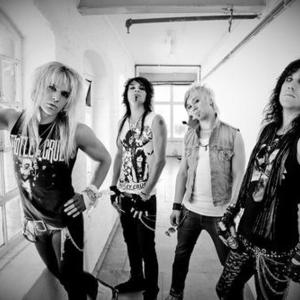 Reckless Love is a four-piece group from Finland that plays exceptionally good rock n' roll. With it's rousing and joyful attitude the band offers a true alternative for today's rock scene where everything seems too dull, dark and serious. Reckless Love's formula is simple; big hard rock just for the fun of it! The band was founded in 2001 and started to gradually gain underground reputation as an energetic live act.

The band was founded in 2001 and started to gradually gain underground reputation as an energetic live act. Eight years of small scale touring, two line-up changes and four demos later the band finally took it's current form and found it's own recognizable sound. In the spring of 2009 Reckless Love started recording it's debut album and signed a world wide record deal with Universal Music.

After two singles (One More Time, Beautiful Bomb) the band is ready to release it's much anticipated debut album early 2010.

Kuopio, Finland isn't exactly Hicksville, Indiana and Helsinki sure ain't no West Hollywood but with Reckless Love the analogies are obvious. This bunch of rockers dropped out of school, moved to Helsinki and chose to scrape by whatever menial jobs available to chase their rock n' roll dreams. Having scored a recording deal with a major label, Universal Music, as the 2nd glam rock band during the last decade or so, Reckless Love show that, if nothing else, the guys master whatever lessons they've ever taken in the subject of hard rock.

Reckless Love's debut album features a plethora of influences audible to the listener, and as knowledgeable as the band seems to be of its musical roots, it's their own take on hard rock that makes the album so extremely exciting. Sure, hard life can teach you stuff, but in Reckless Love's case it has taught them to teach people stuff. The lesson here is: there's not a whole lot crap that cant' be healed with a good song and a smile. And because the songs are so good, smile you will - after you get a load of this. Reckless Love extends sonic hails to the greats of hard rock ranging from Kiss to Van Halen to W.A.S.P. to Warrant to Poison to Guns N' Roses and everything in between, with a heartwarming, sunny disposition able to melt the gloomiest of cynics.

The party starts with Beautiful Bomb, One More Time, Love Machine, So Yeah!!, Feel My Heat and Born To Rock. With subject matter dealing dominantly with the over-enhanced sexuality of a young straight male (i.e. women, or the lack thereof), the songs have a boisterous, energetic, fun, freewheeling party attitude, combined with swaggering, outrageous and sometimes, downright silly lyrics. It's all packed in a top-notch modern, yet adequately retro sound that strongly reflects classic 80's hair metal heroes. Not reducing to a one trick pony, the album also has it's darker, rawer, heavy metal side. Aggressive and theatrical Wild Touch, Badass and Romance have a rowdy, rebellious bite to them. Iced with slick choirs, these cuts include heavy guitar rifforama and some of vocalist Olli Herman's nastiest Vince Neil snarls. This is where the band's Judas Priest, Ozzy, WASP and Ratt influences shine. The album also contains the super slick ballad Sex, which gives away the fact that under the disguise of hell-raising party animal machismo lie sensitive guys wearing their hearts on their sleeves. Predominantly guitar driven, melodic and beautiful the album also portrays the band's classy touch to keyboard arrangements. Featuring the whole arsenal: big choirs, clean high vocals and fragile single voice melodies, almost whispering at times, vocally the album is a wonder to behold, and in what might come as a surprise, the band can also display a striking lyrical depth, almost coming down to philosophical level in Back To Paradise.

While maybe dropouts in regular school, there's not a page in the book of hard rock these guys haven't taken to heart. In the hair metal school tables turn and Reckless Love are the teachers. And the class will only be dismissed once thoroughly entertained.