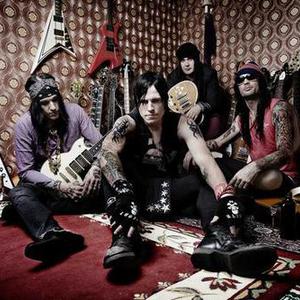 Hardcore Superstar formed in autumn 1997 in Gothenburg and signed to Gain soon afterwards. Their debut album was recorded and released in Sweden. The album attracted the attention of English label Music for Nations and a new worldwide contract was drawn up. The new album, which became the band's "official debut album" contains a few new songs, a new cover and has a new name, "Bad Sneakers and a Pina Colada".

The album contains the hits "Someone Special", "Liberation" and "Have You Been Around" which all achieve top positions on the singles charts in Sweden. The band has made its breakthrough. The video for "Liberation" was nominated for a Swedish Grammy and the band set off on their first tour of Europe and Japan.

2001 saw the release of the follow-up,"Thank You (For Letting Us Be Ourselves)" with singles "Shame" and "Mother's Love/Significant Other. Once again the band toured in Europe and Japan and this time they also went to Canada.

They hooked up with fellow Gothenburg band LOK on a single called "Staden G?teborg" (The City of Gothenburg) and performed a now classic show during the PopStad G?teborg festival. In the summer they opened for AC/DC at a packed Ullevi Stadium. The band also opened for AC/DC and Mot?rhead on the Italian leg of their tour due to their popularity in the area.

In the summer of 2003 the first single "Honey Tongue" was released from their third album "No Regrets" which was released in August 2003. The song entered the Swedish charts at number three. The second single from the album, "Still I'm Glad" also makes the higher reaches of the charts.

In autumn 2003 and winter 2004 the band toured in Sweden, Europe and the USA. A fight broke out at the Swedish Consulate in New York between Thomas Silver and Aftonbladet journalist Fredrik Virtanen. This is a major news story back in Sweden.

Upon their return from the USA the band decided to take a break indefinitely after playing non-stop for over six years. This is interpreted by some in the media that the band had split up, which was never on the cards. Now back on Gain, the band has regained its unique energy which resulted in the new self titled album "Hardcore Superstar".

The album has been given top reviews all over the world. Hardcore Superstar has been Grammy nominated and number one on the Swedish hard rock charts.

The album contains the three hit singles "We don't Celebrate Sundays", "Wild Boys" and "My Good Reputation". They have been on all major national TV and radio shows in Sweden and the tour continued for over a year, entering Europe in September - October 2006.

The band's fifth album "Dreamin? in a Casket" was released in November 2007. Originally, it was meant to include the single "Bastards," but due to the success it achieved in the singles charts it was shelved. The album was praised in the Swedish newspapers and was titled by many as "Album of the Year." Dreamin' in a Casket contains a more heavy guitar riff-based sound and includes more noticeable drumming. The band toured around Europe and Japan, and they ended their "Mentally Damaged Tour" in their home country of Sweden.

In late January, it was announced on the band's official website that guitarist, Thomas Silver, would be leaving the band as he had become "tired of music and touring". Vic Zino, from Crazy Lixx, replaced him temporarily during the world tour, but it was later confirmed that Vic is a permanent member of the band.

In June 2009 the band released their seventh album "Beg For It".

C'mon Take On Me

The Party Ain't Over 'Til We Say So

Dreamin' In A Casket