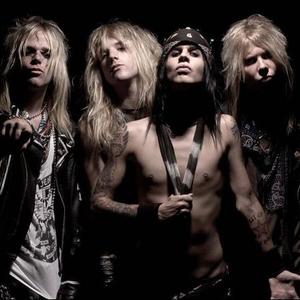 VAINS of JENNA formed in Falkenberg, SWEDEN in 2005. A mere 6 months later the band was in a Hollywood studio with Gilby Clarke (X-Guns N'Roses) cutting demos. Spring of 2006 they toured Europe but were back in Hollywood by summer where they attracted the attention of Bam Margera (MTV's Viva La Bam/Jackass). He signed them on the spot & ?Lit Up-Let Down? hit stores that fall (Filthy Note Records).

March 2010 the band evolved with a great new singer & front man in Jesse Forte. The band also welcomes a 2nd guitarist in fellow Swede Anton Sevholt. VoJ toured Europe as a 5 piece in the summer 2010 playing 40 shows. September 2010 they are back in the US & launched a new single/video for ?Everybody Loves You When You're Dead-2010 Mix?.

After seven years, in January 2012, the band called it quits. It was announced on their official Myspace.

The Art Of Telling Lies

Lit Up Let Down

Baby's Got A Secret (EP)