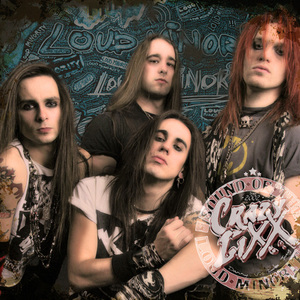 Crazy Lixx is a Swedish hard rock band formed in 2002 in Malm?, Sweden. The core line-up up until the first album consisted of vocalist Danny Rexon (also known as Dirtchild Danny or D.C. Danny), guitarist Vic Zino, drummer Joey Cirera and bass player Luke Rivano. The current line-up features guitarist Andy Dawson in Vic Zino's place. They were among the first bands to emerge in what has been known as "The New Wave of Swedish Sleaze" along with bands such as CRASHD&Iuml;ET, Hardcore Superstar, Babylon Bombs and Vains of Jenna but just like their fellow genre-mates...

They were among the first bands to emerge in what has been known as "The New Wave of Swedish Sleaze" along with bands such as CRASHD&Iuml;ET, Hardcore Superstar, Babylon Bombs and Vains of Jenna but just like their fellow genre-mates, Crazy Lixx have formed their own style and are now considered to be more of an 80's influenced hard rock band.

The name came from a toy guitar Danny had as a child, it was his first instrument. Later on they realised the toy was actually called Hot Lixx, but having estabilished a name by that point they didn't change it anymore.

Danny Rexon, Vic Zino and Joey Cirera all played in a heavy metal band called Blindead prior to the formation of Crazy Lixx and when Danny decided to form his new, more rock oriented band he asked Vic and Joey to join and the core of the band was set.
At this time Danny Rexon was the rhythm guitaris of the band so Crazy Lixx set out to find both a vocalist and a bass player. The later position was filled a couple of weeks later by a childhood friend of Vic's, Max Flamer, who had previously played in a metal cover band with Vic and Joey but they had a much harder time finding a vocalist. Though without a lead singer, the band set out to record their first demo in the summer of 2003 in hopes of attracting a vocalist and the band decided that Danny would do the lead vocals on the recording.
The first demo (recorded by Robert Ahrling at Flat Pig Studio in Malm?) containing three now classical Crazy Lixx tracks; Death Row, Love on the Run and Bad in a Good way, all written by Rexon and Zino, was a huge leap forward for the band. The fact that the vocals came out as good as they did convinced the band that Danny should handle that part from now on and that they should instead find themselves a new rhythm guitarrist. The demo itself was printed in hundreds of copies and began circulating in the underground sleaze rock scene in Sweden.


On the road for the first time:
The new vacant position of rhythm guitarist was filled later that year by Krizzy Field (currently in Pretty Wild) and the band began touring around clubs in the Malm? and Stockholm areas, including appearances at Club Riot Act in Stockholm, a club which has been a central launching point for many of the most successfull bands of the Swedish Sleaze movement such as; Crashd?et, Vains of Jenna, Babylon Bombs, Sister Sin and of course, Crazy Lixx.
Inbetween gigs, a second demo was recorded in 2004 in a studio that Krizzy worked in. It was an over ambitious project where the band decided to record six tracks and the entire recording was spread out during a long period of time. The second demo (known as the Do or Die-demo) didn't come out quite as good as the band had expected but still contained some good tracks that have survived up to this date. The full tracklist was: Rock n' Roller Coaster, Over You, Do or Die, Daddy's Little Girl, Love is a Drug and Get on Your Knees and yet again Rexon and Zino stood for all the songwriting.
The line-up of Rexon / Zino / Cirera / Field / Flamer lasted a little over a year and ended abruptly when Krizzy and Max got into a drunk fist fight after a show in Kalmar, Sweden. Tensions had been growing between the two since the day Krizzy joined the band and it was really only a matter of time until it got messy. The rest of the band knew what they had to do and a short time later both the members were fired.


Luke joins the band:
Without the means of performing live the band started writing new songs for what would become their third demo. It wasn't until May 2005 that the band performed on a stage once more, this time with just one guitar player and a stand in bass player, John Huldt. Shortly after the trio entered Flat Pig Studio (where the first demo was recorded) to re-record the strongest track from the second demo to release it as a single. The track was Do or Die and the single with the same name was printed in 1000 copies (now sold out and out of print). The band sent the new single to record companies all over Sweden in hopes of landing a record deal but none showed any interest and the trio knew that they had to get out on the road to promote themselves further.
After the summer of 2005 Luke Rivano, an old band mate of Danny's, was asked to be the new bass player and though originally a guitarist, Luke accepted to fill the spot. The band decided that Vic would now handle all the guitar playing himself and that there was no need for a second guitarist. With the new line-up the band hit the road once more.
During the first months of 2006 Crazy Lixx entered and won a local music competition in Helsingborg and among the prices were gigs at summer festivals and a recording in the Palace of Noise (PON) studio outside of Helsingborg. The band used this to record the track No More Foolin' but up to date the song has never been printed.
The summer of 2006 saw a lot of shows for Crazy Lixx including playing as opening act for Hardcore Superstar on Helsingborgsfestivalen and the band grew more popular for each

Heroes are Forever:
After a successfull and busy summer, at the sime time as the band was recording their third demo, Danny was contacted by a represantative from Swedmetal Records who had gotten hold of some of the earlier demos by Crazy Lixx and was interested in hearing some more material. Danny sent over all the songs the band had recorded and Swedmetal invited the band to support ex-Guns 'n Roses guitarist Gilby Clarke on his concert in V?xj?, Sweden. Impressed by the live performance of the band Swedmetal offered to release the band's unfinished, third demo and offered Crazy Lixx a record contract for their debut album. The band accepted.
After the recording of what was ment to become the third demo was done, the two songs; Heroes are Forever and On Your Marks, get Set, Rock! were sent to producer Chris Laney who mixed the tracks for the coming single release and the single itself was released in the end of January of 2007 on an official release party held at Club Crazy Night in Stockholm. Now the work began on the bands debut album.

The sound of the Loud Minority:
The date was set to 1:st of July 2007 and the band decided to record their debut album with producer Chris Laney at Polar Studios in Stockholm. In the meantime the band continued to write songs for the album that they came to call Loud Minority and played various gigs including a 3-day mini tour in the UK and it all culminated with their appearence on Sweden Rock Festival 07. The band temporarly relocated to Stockholm and spent almost a month in the studio recording 13 tracks for the album. The complete track list is: Hell or High Water (Zino / Rivano), Dr Hollywood (Rexon), Want It (Rexon), Love on the Run (Rexon / Zino), Make Ends Meet (Rexon), Death Row (Rexon / Zino), Heroes are Forever (Rexon), Do or Die (Rexon / Zino), Pure Desire (Rexon), Boneyard (Rexon / Zino), The Gamble (Rexon), Bad in a Good Way (Rexon / Zino) and No Guts, No Glory (Rexon / Zino). (The last two tracks were excluded from the first release of Loud Minority but can be found as bonus tracks on the Japan release of 2008.) The album mas mixed and ready in the fall and the album was finally released in November 2007, recieving great reviews from both media and fans and a second place on the national Swedish hard rock chart.
Just as with the single release, the official release party for the album was held at Club Crazy Nights in Stockholm and during the last few weeks of the year the band played a couple more shows before setting of to the UK as a support act for Hardcore Superstar in the middle of January 2008.

On the last gig of the UK tour, Silver, the guitarist of Hardcore Superstar at the time, announces that he wishes to leave the band and suggests that the band should ask Crazy Lixx's Vic Zino to play for the remainder of their tour. Zino accepts and heads of to Australia a couple of days later. Though not official, the remaining band members of Crazy Lixx know that it is only a matter of time before they have to look for a new guitar player and a couple of weeks later Vic Zino joins HCSS as a new permanent member.
Crazy Lixx supports Hardcore Superstar on a couple of more gigs in Sweden and Zino plays two shifts, appearing as the guitarrist for both bands. The last gig with Vic is played in Hultsfred, Sweden on the 26:th of april 2008 and with the departure of Zino, touring for Crazy Lixx stops and the band announces that they are officially searching for a new permanent guitar player for the band.


Andy Dawson to the rescue:
After weeks of searching Crazy Lixx announce ex-SHARP guitarist Andy Dawson as their new member and the band sets out for the summer festivals, including two successfull trips to Switzerland.
In the fall of 2008 the band releases the first physical single form the album; Make Ends Meet, containing the tracks Make Ends Meet and a radio edit of Want It and Andy, previously living in Stockholm, relocates to Malm?.

Sound Of The Live Minority