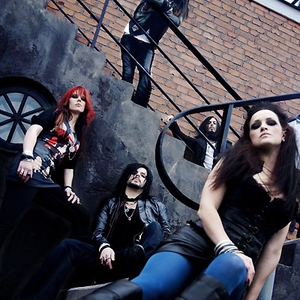 ALL ENDS, featuring Jonna Sailon and Tinna Karlsdotter on vocals, Fredrik Johansson (DIMENSION ZERO, IN FLAMES' "The Jester Race" album) and Peter M?rdklint (EMBRACED, TENEBRE) on guitar, along with Josef Skan?s on drums, are a band founded in 2003 in Gothenburg, Sweden. It features a sound housing somewhere between rock and metal that lives first and foremost through the fascinating voices of the two front-ladies.

It is this two-pronged female approach that distinguishes these Swedes from the rest of the crowd and gives them their own unique sound. The debut EP 'Wasting Life', released on May 11 2007 through G.U.N. Records, doesn't sound like NIGHTWISH or WITHIN TEMPTATION or EVANESCENCE?On the contrary, it sounds like nothing other than ALL ENDS!

The fact that ALL ENDS is made up of five top musicians of their genre is evident in the magnificent 'Alone', which skillfully treads the line between metallic wrecking ball and pop anthem. And the title track, 'Wasting Life', is also equally characterized by the simultaneously powerfully and melodic guitar work that is simply irresistible in combination with the sleek grooves and whale-sized hooks.

ALL ENDS was fronted by Emma Gelotte (In Flames Bj?rn Gelotte's sister) and Tinna Karlsdotter for most of its time, but on March 2009 the band announced on their official website Emma was leaving the band, because she got tired of music and touring. She was replaced immediately by powerpop singer Jonna Sailon. Emma's vocals can be heard on all of the band's releases, from its very start in 2003 until their 2008 self-titled album.

A Road To Depression