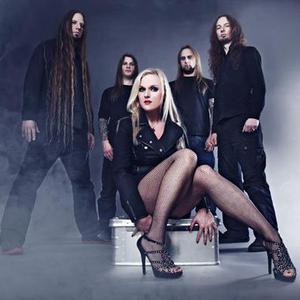 Leaves' Eyes was formed by Liv with her husband, Alexander Krull, and members of his band, Atrocity. The band combines atmospheric metal and classical elements. The vocals of Liv Kristine are occasionally backed up by death growls from Alexander Krull, but on many songs she sings alone.

Their debut album, "Lovelorn," was released in 2004. The second album, "Vinland Saga," was released 30th of May 2005, and retells the tale of the discovery of Vinland (i.e. North America) by Leif Erikson. The EP "Legend Land" was released on June 2, 2006 as a followup to Vinland Saga.

Liv Kristine created the band name, which is a homophone for the way "Liv's Eyes" is pronounced by a Norwegian. "Leaves" is connected to nature, which has always been the biggest inspiration for her. Liv Kristine writes all of the lyrics for the band.

Fires In The North (EP)