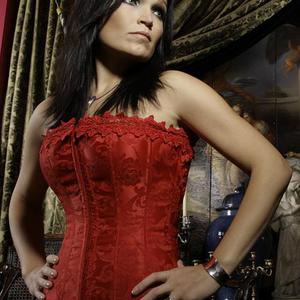 Tarja Soile Susanna Turunen Cabuli (born August 17, 1977, in Kitee, Finland), better known as Tarja Turunen (while she was vocalist of Nightwish) or simply Tarja (after she was fired), is a Finnish singer. Tarja began to study music at age six, and moved to the city of Kuopio at 18 to study at the Sibelius Academy. She married Argentinian businessman Marcelo Cabuli in early 2003. She is the former lead singer of the Finnish band Nightwish which she founded along with Emppu Vuorinen and Tuomas Holopainen in 1996.

She is the former lead singer of the Finnish band Nightwish which she founded along with Emppu Vuorinen and Tuomas Holopainen in 1996. After being expelled from the band in October 2005, Tarja Turunen is now devoting her time to her solo career under the stage name of Tarja.

During the spring of 2005, she prepared a collaboration with Germany's Martin Kesici, the duet Leaving You For Me, also accompanied by a video. On November 8th 2006, Tarja's first solo album, Henk&auml;ys ikuisuudesta was released as a Christmas album.

Tarja's second solo album, My Winter Storm, was released in November 2007 and achieved gold status in Finland on the day of release. The album took the number 1 spot in the Finnish charts. Tarja also sings on track In The Picture, composed by Rage guitarist Victor Smolski, on Nuclear Blast Allstars' album 'Into The Light', 2007. In 2009, Tarja released a duet with Doro Pesch, the former vocalist for heavy metal band Warlock.

Tarja's third solo album, What Lies Beneath was released in Finland on September 1, 2010. The album sold around 1,300 copies in the United States in its first week of release, landing it position 24 on the Top New Artist Albums chart. This is the first album on which Tarja is credited for composition on every original track.

Christmas Together: Live At Olomouc And Hradec Králové 2019

In The Raw (Deluxe Edition) CD2

In The Raw (Deluxe Edition) CD1

From Spirits And Ghosts (Score For A Dark Christmas)