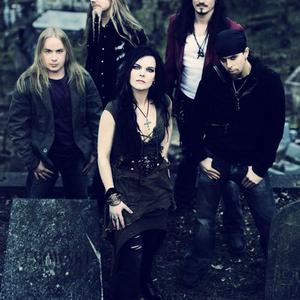 Nightwish is a symphonic metal band, formed in the town of Kitee, Finland in 1996. The band currently consists of Tuomas Holopainen (keyboards), Marco Hietala (bass, vocals), Emppu Vuorinen (guitars), Jukka Nevalainen (drums and percussion). On the 1st of October Nightwish made a statement Nightwish and lead vocalist Anette Olzon have "decided to part company, in mutual understanding, for the good of all parties involved". Olzon was vocalist for Nightwish from 2006-2012.

On the 1st of October Nightwish made a statement Nightwish and lead vocalist Anette Olzon have "decided to part company, in mutual understanding, for the good of all parties involved". Olzon was vocalist for Nightwish from 2006-2012.

The statement continued on to say that "Nightwish has no intention of cancelling any upcoming shows, and as a result we have decided to bring in a substitute vocalist starting in Seattle 1.10.2012. Floor Jansen from The Netherlands (ex-After Forever, ReVamp), and she has graciously stepped in to help Nightwish complete the Imaginaerum world tour."

Anette Olzon was announced to be the replacement for former vocalist and frontwoman Tarja Turunen in 2007 after the latter was fired in 2005. She has appeared on Dark Passion Play, Made in Hong Kong (And in Various Other Places) and Imaginaerum, as well as the two-year Dark Passion Play tour.

The band's leader, keyboardist Tuomas Holopainen, composes songs that are often classified as either symphonic metal or power metal; their musical style has also been described as a symphonic metal variant, called opera metal and even in some cases called 'epic metal'.
Nevertheless, Nightwish is considered one of the main developers of the symphonic metal genre, which encompasses similar bands such as Within Temptation, Therion, Epica, Edenbridge, Lunatica, and Visions of Atlantis.

The original idea of Nightwish was largely inspired by The Gathering, and the idea was to use keyboards, acoustic guitars and the operatic vocals of their then singer Tarja Turunen. This idea was changed in 1997, as a drummer was added, and the acoustic guitar was replaced by an electric guitar.

The idea of using operatic vocals was changed dramatically with their third album Wishmaster (2000), and more so on future albums, especially Dark Passion Play (2007). In 2001, Holopainen asked Sami V&auml;nsk&auml;, their bassist since 1998, to leave, and he was replaced with Marco Hietala (Tarot, ex-Sinergy), leaving Sinergy. The bassist would, apart from playing his instrument, also perform male vocals.

Century Child (2002) marked a new change in Nightwish' music, as they used a live orchestra on several songs, to get a more present feeling of classical music. This was developed further with their US breakthrough Once (2004) and Dark Passion Play (2007), the latter being the first to use orchestra on all of the songs.

In October 2005, after touring for their Once, the four other members of Nightwish decided that it was best to continue Nightwish without Tarja, a feeling they expressed through an open letter.

This was due to the fact that they felt that her husband Marcelo Cabuli and commercial interests had changed her attitude towards Nightwish.
Tuomas Holopainen gave the letter to Tarja after the last concert of the tour. In spring 2007, 35-year-old Anette Olzon from Katrineholm, Sweden was announced to replace Tarja Turunen.

The band released a new single, Eva, featuring their new singer in May, 2007.
It was followed by another single, Amaranth, on August 22, and a studio album in late September entitled Dark Passion Play.
The third international single of the album was Bye Bye Beautiful, released on February 15, 2008, and the next was The Islander, released in May, 2008.

On February 10, 2011, Nightwish announced via their website that the title of their seventh studio album will be Imaginarium. The album released in late 2011, is a concept album telling the story of an old composer on his deathbed, reminiscing of his youth. The album is to be produced alongside a movie with the same name, directed by Stobe Harju, who previously directed the music video for "The Islander". The first single to be released was Storytime on November 11, 2011. (Storytime Songfacts).