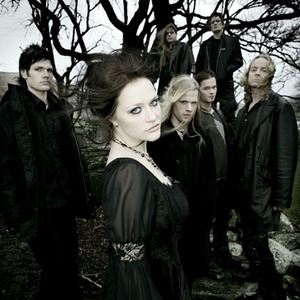 Tristania is a gothic metal band from Stavanger, Norway, formed in the end of 1996 by Morten Veland (male vocals/guitars), Einar Moen (keyboards), and Kenneth Olsson (drums). Soon thereafter, the band's original lineup was fleshed out further with the addition of guitarist Anders Hidle, bassist Rune &Oslash;sterhus (who was recently replaced by Ole Vistnes), and vocalist Vibeke Stene (who has been replaced by Mariangela Demurtas).

The band's music is usually classified as gothic metal, due to its strong ties with the genre's history in addition to the band's use of styles and traits stereotypical of the genre. However, they pride themselves on their musical diversity, as evidenced by the evolution of their music over the course of their five studio albums.

Tristania's earlier albums Widow's Weeds and Beyond the Veil put a lot of focus around classical like female vocals, haunting choruses and classical instruments such as pipe organ, flutes and violins. The leading voice on many of their songs was the menacing harsh vocals of Morten Veland. The atmosphere is also achieved by quite unique sounding guitar effects.
Morten Veland left in 2000 for "musical and social differences" to form the band Sirenia.

With the release of the World of Glass album in 2001, Veland's growls were replaced by guest vocalist Ronny Thorsen from Trail of Tears, and clean male vocals were provided by veteran guests &Oslash;sten Berg&oslash;y and Jan Barkverd. Despite the new lineup and a slightly changed style that turned off some fans, the album received critical acclaim.

Ashes was released in 2005 with another change in members. Of the three male vocalists from the previous album, only &Oslash;sten Berg&oslash;y joined permanently, and is now accompanied by Kjetil Ingebrethsen doing the honors on growling vocals. The band took another step away from the sound of their debut albums and more into an experimental avant-garde style that sounds uniquely refreshing.

The Ashes Tour in Europe (minus Einar Moen, who remained at home to work on more material for the band, but is still an active member) brought about another change for the band, the addition of a second guitarist ? Svein Terje Solvang ? who previously played with the band for touring purposes. His addition to the band as a permanent member in May 2005 marked the first time Tristania has had a two-guitarist team since Beyond the Veil.

Their latest album, Illumination, was released on January 30, 2007. Just one month after the release, Vibeke announced her departure due to "personal reasons".

On October 19, 2007, Italian singer Mariangela Demurtas (Mary) was announced as the new female singer. Before joining Tristania, she has performed with Reel Fiction and Alight.

In May 2008, Svein Terje Solvang left the band.

Just before the release of Rubicon (august 2010) it was announced that the bands line-up had more changes. &Oslash;sten Berg&oslash;y was replaced by Kjetil Nordhus] so the former could focus on parenthood and founding member and drummer Kenneth Olsson was replaced by Tarald Lie, because of a knee injury of several years.