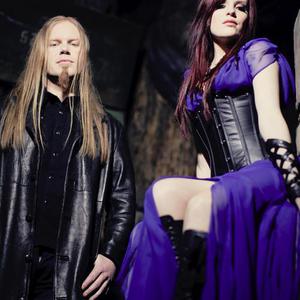 The lyrics are concerned with human existence, emotion, and mental states.

Sirenia (at first called "Masters of Sirenia"), named after the Sirens of Greek mythology, was founded in 2001 after Morten Veland left Tristania. The band failed to find a suitable singer prior to recording in France, so they conducted auditions and found Fabienne Gondamin for the recording session of At Sixes and Sevens.

On the subsequent tour and follow-up album, An Elixir for Existence, Gondamin was replaced by Henriette Bordvik.

On September 13, 2005, it was announced that Bordvik would be leaving the band, and the search for a new singer commenced. Bordvik's replacement, Monika Pedersen of the band Sinphonia, was introduced on April 10, 2006. In the same year, Bj&oslash;rnar Landa (from Artifact) joined the band as a guitarist.

Nine Destinies And A Downfall came out in February 2007. This album features more down-tuned guitars that chug and growl, with a texture not previously heard on Sirenia albums. Moreover, the male grunting and harsh vocals have been greatly reduced, with grunts only appearing on three songs: Sundown, Seven Keys And Nine Doors, and Downfall. There are occasionally clean male vocals as well, but they are used very rarely. Thus, fans who enjoyed the delicate balance between Morten Veland's harsh vocals and the female voice will likely be disappointed. On this album, the new female vocalist is front and center. Choirs are sprinkled throughout the songs, giving the music the feel familiar to Sirenia fans. This album marks a significant departure from Morten Veland's work in Tristania.

On May 19th, 2008, it was announced that Bj&oslash;rnar Landa left the band in order to have more time for his family and studies. He is replaced by Michael Krumins from Green Carnation.

'The 13th Floor' is the title of the new album. The release date is set to the 23rd of january 2009. Expect a melodic and powerful album in the typical Sirenia vein. The brand new single: 'The Path To Decay' will be released on December 26th and the new video from SIRENIA, will receive its online premiere on January 5, 2009 via MySpace.

The bands fifth studio album, 'The Enigma of Life' was released on January 29, 2011. Less than two months after the release of the album, Michael Krumins departed from the group to spend more time on other projects

Perils of the Deep Blue

The Enigma Of Life

Nine Destinies And A Downfall