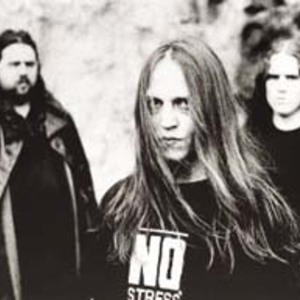 The Swedish death metal band Hypocrisy was formed by Peter T&auml;gtgren in 1990 upon his return to Sweden from Florida, where he had been inspired by that state's flourishing death metal scene (bands like Morbid Angel, Deicide, Death and Obituary). Hypocrisy's first demo was recorded entirely by T?gtgren himself; once it secured him a record deal, he recruited a lineup of Masse Broberg (Vocals), Jonas &Ouml;sterberg (Guitar), Mikael Hedlund (Bass) and Lars Sz&ouml;ke (Drums), while he himself settled on guitar.

Hypocrisy's first demo was recorded entirely by T?gtgren himself; once it secured him a record deal, he recruited a lineup of Masse Broberg (Vocals), Jonas &Ouml;sterberg (Guitar), Mikael Hedlund (Bass) and Lars Sz&ouml;ke (Drums), while he himself settled on guitar. This lineup released "Penetralia in 1992, upon which point ?-sterberg left the group. "Obsculum Obscenum" appeared in 1993, and Broberg subsequently departed as well, with T?gtgren assuming vocal duties. Thus reconstituted as a power trio, Hypocrisy began to hit its stride, recording The Fourth Dimension (1994), Abducted (1996), and "The Final Chapter" (1997); in the meantime, T?gtgren developed an alternate career as a producer, working with bands like Dimmu Borgir, Immortal and Dark Funeral. Hypocrisy officially disbanded following the release of "The Final Chapter"; however, fan interest persuaded T?gtgren to reconsider the breakup, and the live album "Hypocrisy Destroys Wacken 1998" was released in early 1999 as a precursor of things to come. The new album "Hypocrisy" followed shortly thereafter and "Into The Abyss" was released in mid-2000.

After closing the door on his band Seditious following their 3- and 5-song "Life Of Pain" demos, guitarist T?gtgren formed Hypocrisy in Ludvika, Sweden as a quintet in 1990 after having briefly lived in Florida in the late ?80s ? and occasionally drumming for Malevolent Creation. The inaugural line-up included Masse Broberg on vocals, Mikael Hedlund on bass, Jonas ?-sterberg on guitar, and Lars Sz?ke on drums. This first incarnation released Penetralia in 1992 (with its heavy Morbid Angel, Deicide and Entombed influences), but it was 1993's "Obsculum Obscenum" when the metal underground took notice of the purity of Hypocrisy's old school death metal approach combined with the unbridled fury of the burgeoning black metal genre. 1994's "Inferior Devotees" five-song EP showcased the T?gtgren / Hedlund / Sz?ke line-up that most would come to associate with Hypocrisy, though equally notable was T?gtgren's permanent switch to lead vocals. "The Fourth Dimension", 1994's full-length studio album, showcased T?gtgren's vocal range and also introduced keyboards, melodies, and slower tempos into Hypocrisy's musical cartography.

With 1996's excellently produced "Abducted", T?gtgren began to share his lifelong childhood fascination that would become his modus operandi: themes & lyrics about extraterrestrials. Introducing ?Roswell 47? (a song destined for set list immortality) and securing an infinite amount of future writing material, Hypocrisy continued to prioritize moods over strict adherence to any one musical genre, and therefore pursued a legacy of sonic alchemy that could be death, black, thrash, and even gothic at any given moment. The dirtier sound of 1997's "The Final Chapter" reached a wider audience with its fluid elements; however, rumors circulated that the album title was broadcasting the band's dissolution. Clearly, the strains of writing and producing Hypocrisy's music and lacking the time to further develop his own electronic/industrial side-project with clean vocals (Pain) led T?gtgren to choose between Hypocrisy's career and Abyss Studios' continued existence. Swayed by worldwide fan pleas and weary from the unrelenting requests to produce records for other bands, his decision was made easier by a contagious desire to experience a Swedish summer outside the confines of a studio control room, to tour more (and perform half-naked!), and use Abyss Studios solely to record his own bands, as well as a few select bands.

1999's self-titled album hijacked Hypocrisy's retirement and a renewed vigor marked the band's reformation, elegantly captured in the song ?Fractured Millenium?. The tracks on 2000's death-drenched "Into The Abyss" were captured in a few weeks, and were an exercise in spontaneity that resulted in a display of energy so raw, it proved that a band's death metal origins could propel music into exciting new landscapes. In 2001, Hypocrisy fans around the world were invited to choose the track listing for the "Years Of Chaos & Confusion" box set, with all chosen songs released prior to 1996's "Abducted" re-recorded to drench them in a heavier production. Always determined to evolve their style, Hypocrisy never seemed content with the stagnant lethargy of a redundant sound. Answering to no one but themselves and borrowing a title from Joseph Heller's classic tale of contradiction, "Catch 22" was released in 2002 and reared a savagely experimental and evolutionary attitude. Touring North America that year with Killswitch Engage, Soilwork, and Scar Culture, fans were treated to addictive doses of Hypocrisy's live, vile aggression. Honoring the pledge to tour more, Hypocrisy was noticeably affected by their pillaging of North America in late 2003 with Dimmu Borgir, Nevermore, and Children of Bodom and numerous sold-out shows. It came as no surprise that 2004's "The Arrival" had a predisposition of urgency, though it also came to be long-time drummer Lars Sk?ze's swansong. Former Immortal/Grimfist drumming machine Reidar Horghagen ? a man T?gtgren had long admired ? replaced childhood friend Sz?ke (who also played in T?gtgren's school band, Conquest) not only for the band's upcoming tour with Cannibal Corpse, Exhumed and Vile, but as a permanent member. Procuring passport stamps from various countries in Europe and South America, Hypocrisy returned to North America in the spring of 2005 with Soilwork, Dark Tranquillity and Mnemic to harvest some frenetic momentum before heading into the studio to record their latest album.

It's the inherent dignity in "Virus" that affirms why Hypocrisy continues to impact today's extreme metal scene even after more than a decade of existence. The aural spectrum enveloping the tormented opening scream on ?Warpath?, the punishing guitar riffs on ?Craving For Another Killing?, the time-honored gallop in ?Scrutinized? (featuring a guitar solo by Gary Holt of Exodus), the melancholy melody of ?Incised Before I&rsquo;ve Ceased?, and the collective manifestation of the band's Thanatos in ?Blooddrenched? is where Hypocrisy exhibits their dauntless and valiant death instinct. ?The new Hypocrisy songs roar with dynamism that the band never before grasped,? proclaims Metal Maniacs, and no truer truth could be spoken. With the bassassinations of Mikael Hedlund, the percussive endeavors of Reidar Horghagen, and the addition of newly permanent / long-time live guitarist Andreas Holma (a death metal musician with a jazz background who moonlights as a fretless bass player), Hypocrisy continues to be led by the man who considers freedom to explore and create the most contagious virus known to humankind. Making music is no job - it's an adventure, and Peter T&auml;gtgren, the Godfather of Gothenburg, is on a worldwide mission to infect the masses at all costs ? sleep be damned.

Too Drunk To Fuck (VLS)

Hell Over Sofia - 20 Years Of Chaos And Confusion CD2

Hell Over Sofia - 20 Years Of Chaos And Confusion CD1

A Taste Of Extreme Divinity