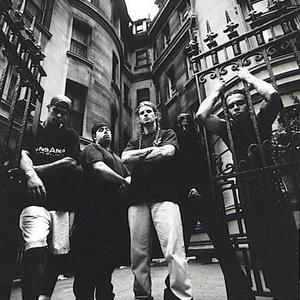 Musical trends come and go quicker than most bands themselves, and endurance is rewarded to those acts who in the end find ways to take the aspects of their writing to new and inventive levels. New York's Merauder were on the forefront of the metalcore wave in the early '90s, and few bands have had the pleasure of receiving the worldwide attention and embellishing the genre's conviction as they have.

Three years in the making, and over four years since their highly successful debut, Master Killer, Merauder's name is once again pouring over the heavy music world with the band's new album, Five Deadly Venoms.

Containing the same unbridled aggressions as its predecessor, the new album sports mature songwriting to ride along with the metallic-edged NYHC sound that you would expect from Merauder. Fair warning has been given; Five Deadly Venoms is dangerous and infectious, and will certainly make the younger generation of the genre's acts stand up and pay homage. Merauder's Brooklyn upbringing allowed them early on to learn the dual meaning of survival: their ties with bands like Biohazard gave them some valuable industry insight, while coming up within local gangs helped them get through the treacherous neighborhood in which they were raised.

With their formation in 1990, the band's early days were spent playing live shows with other hardcore and metal notables such as Sick Of It All, Carnivore, Motorhead, Morbid Angel and the Cro-Mags, and along the way released a pair of demos and contributed a track to the now legendary 1992 compilation, East Coast Assault. Realizing that they would not be able to fully progress with their original singer, Merauder sought out and recruited a young vocalist by the name of Jorge from the band Full Contact, which was the best decision they could ever have made.

After a few more years of gigging and writing material, the band released a split 7" with fellow New Yorkers Stigmata in 1995, and immediately began and east coast tour with Biohazard despite still being unsigned. Their third overall demo (and first with Jorge fronting the band) was the final argument that this band was ready to step up to the next plateau. By mid 1995 the band was signed to Century Media Records and quickly began work in the studio with Parris Mayhew, founding Cro-Mags guitarist and long-time friend. Before Master Killer could even be released the band was hand-picked by Fear Factory as their opening act for a string of 20 US dates, and the band later were introduced to Europe by opening for German legends Bohse Onkelz, who routinely draw between 5,000 and 7,000 fans per show.

All in all, Master Killer has seen worldwide sales of over 30,000 copies, and Merauder fans have been starving for new material for far too long. Recorded at various periods and sessions throughout '98 and '99, Five Deadly Venoms (the title of course was inspired by the famous kung-fu movie) was produced by A.J. Novello from Both Worlds, and the in-your-face vocals combined with creative playing and song arrangements make this a unique, forceful and at times quite melodic metal core album. If the jarring shock of opener "Scarred" doesn't hook the listener from the very start, the catchy "Find My Way" or the emotionally swirling "Unify" certainly will (the record also closes with a cover of the Cro-Mags' "Final War").

More experimental tracks such as "Life Of My Own" and the moody title track quickly prove the progression of this outfit, and the contributions of new drummer Pokey (ex-Leeway, Both Worlds) and bassist/good friend Mike (currently in Candiria, one of Rolling Stone's 10 best current metal bands) are the final pieces that complete Five Deadly Venoms. It's their dedication that has made them one of the most notable crossover acts ever, and Merauder is back and deadlier than ever before.