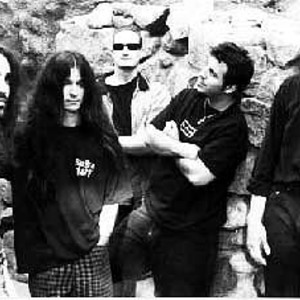 Psychotic Waltz is a progressive metal band formed in El Cajon, California in 1988. The first incarnation of the band was under the name Aslan, after a character in the novel The Lion, the Witch and the Wardrobe by C. S. Lewis. With money earned from local shows and T-shirt sales, they recorded a self-titled demo tape in 1986. After discovering another band with the same name, they changed theirs to Psychotic Waltz and recorded a new four-song demo in 1988.

The first incarnation of the band was under the name Aslan, after a character in the novel The Lion, the Witch and the Wardrobe by C. S. Lewis. With money earned from local shows and T-shirt sales, they recorded a self-titled demo tape in 1986. After discovering another band with the same name, they changed theirs to Psychotic Waltz and recorded a new four-song demo in 1988.

In 1990, they debuted with their independently financed debut A Social Grace, which was released in Europe via a licensing deal with the German label Rising Sun Productions. The album was very well received in Europe, being named album of the month in some European magazines,[citation needed] The situation in US was more difficult, as the album was released under the band's own Sub Sonic Records label. With practically no promotion and minimal distribution, it remained an extremely underground item. In 1991, the band appeared in the Dynamo Festival in Holland.

After the tour, the band's guitarist, Dan Rock, suffered a near-fatal accident after falling off a bridge while rappelling.[3] The band went on to record their second album, Into the Everflow. The album was recorded from August?October, 1992, at Phoenix Studios in Herne, Germany, and was produced by Mekong Delta's main man, Ralph Hubert. After recording the album, but before its release, the band did a small tour while Dan Rock recovered from his accident. The CD was released in Europe on Dream Circle Records, and was very well received, getting album of the month honors in many European magazines.[citation needed] After Rock recovered, the band was nominated as the Best Hard Rock band at the 1992 San Diego Music Awards.

By that time, the band was at the peak of its popularity. They signed with Ralph Hubert's own label, Zardoz Music, for their third album, Mosquito. Recording took place in late 1994 in Record Plant and Madhatter studios in Los Angeles, with the help of the famous metal producer Scott Burns. The initial response for this album was mixed, as the more conventional songwriting that the band followed led some hardcore fans of the band to label it as a sell-out. This was the last album that was recorded with their initial lineup, as bassist Ward Evans left the band after two tours in Europe and was replaced with Phil Cuttino.

They entered the studio once again in 1996, for what proved to be their last studio work together, Bleeding. This time, Scott Burns did the engineering, but the record was mixed by Dan Rock and engineer Woody Barber. Before the band started touring in support for the new album, guitarist Brian McAlpine announced that he would not be able to follow the band due to familial obligations. He was replaced by Steve Cox for the band's final two European tours. Phil Cuttino filmed a promotional video for the track "Faded". This proved to be disastrous for the band, as a crew member sued the band in April 1998, claiming that a light on the set caused him to go blind.

The lengthy court battle that followed, coupled with the different musical interests that the band members had, contributed in the band's demise. Buddy Lackey was the first to leave the band. For a short while, the remaining band members tried to continue with the band, but eventually each went his own way. Rock recorded two instrumental albums with his project Darkstar. Norm Leggio and Steve Cox created the band Teabag, and Buddy Lackey formed the band Deadsoul Tribe, where he performs using his real name, Devon Graves.

Psychotic Waltz reunited in 2010, will tour Europe in support of Nevermore and Symphony X, and are planning to write, record and release a new album.