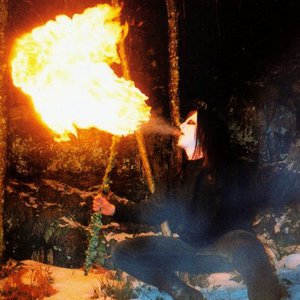 Ancient was originally a solo- project of guitarist and composer Aphazel, started in Norway in the year of 1992. Aphazel quickly developed his project of atmospheric and dark Black Metal into a full band with Grimm as vocalist/ drummer. The two released the "Eerily Howling Winds" demo and the "Det Glemte Riket" 7" in the years 1993 and 1994, and the band quickly established a strong following in the underground Black Metal scene worldwide, and, among others, Listenable Records/ Osmose noticed the potential of this band and released the debut album of Ancient namely "Svartalvheim".

This album was bound to be one of the most sold and appreciated of this musical genre and is today considered a Black Metal classic. The mini album "Trolltaar" followed a year later and ended up being the last release with Grimm, who went into other directions musically.

Aphazel moved to USA and recruited Lord Kaiaphas as the new vocalist. Impressed by his performance in the bands Grand Belial?s Key and Thokk, he was sure of his talent and value for the band. An extensive contract with Metal Blade Records was signed and in 1996, together with Kimberly Goss and Kjetil, they released the "The Cainian Chronicle" filled with big guitars and great atmospheres, followed by a European tour and the video, "Lilith?s Embrace". This album also went on to become a classic in the genre.

1997, a few line- up changes took place and the album "Mad Grandiose Bloodfiends" was released, introducing guitarist/ keyboardist Jesus Christ ! A huge world tour followed, and afterwards, tired of life in the USA , Aphazel decided to move back to Europe, this time Italy , after having met female vocalist Deadly Kristin.

1999 brought "The Halls Of Eternity", a return to a heavier sound with Aphazel as the band's new vocalist, and Dhilorz was recruited on bass. Some touring followed including the band's first tour through Scandinavia . In 2000 Ancient did an impressive performance at the Wacken festival with new respected drummer Grom, receiving an excellent feedback by press, record company and fans. The mini album "God Loves The Dead" was released in January 2001, including special material like re-mixes, a cover, videos and other special material along with the title track, a release mainly for the die hard fans, waiting for the release of ?Proxima Centauri?.

Recorded at the studio of Andy La Rocque, Los Angered Recording, and mastered at Sterling Sound, the band had created not just a masterpiece, but also an album with a production far better than the previous releases. "Proxima Centauri", an album showing a great leap forward for the band, in all ways possible, showed a style more aggressive, heavier, more technical and complete than the Ancient from the past. A long tour followed and Ancient visited new places this time - like Mexico, East Europe, and was proud to be the first black metal band to ever visit countries like Israel, Bulgaria and Romania ( by the famous Transilvania region). After this, another line- up change took place and Deadly Kristin left the band due to practical reasons.
Their last output is called "Night Visit".

lack Metal outfit ANCIENT was initially formed in Eidsvaagneset / Bergen as a solo project by Aphazel (a.k.a. Magnus Garset), an erstwhile member of Death Metal act PUTREFACTION, in late 1992. The group's prominence rose steadily due to their inclusion of two significant female contributors, Kimberley Goss and Deadly Kristin successively, and their relocation to the USA, but was elevated still further in 1999 when the band's album 'The Cainian Chronicles' was directly linked to one of Finland's most notorious murders.

Aphazel's solo undertakings expanded into the beginnings of a band unit in 1993 when drummer / vocalist Thorg (Henrik) was motivated to join the endeavour. They then performed a handful of Norwegian gigs, conducted with MOLESTED's bass player Kenneth Lian on loan. ANCIENT's first official, three track demo that September, recorded at Verftet Lydstudio, featured 'Eerily Howling Winds', 'The Call of the Absu Deep' and Det Glemte Riket'. The latter song was also featured on the Metal Blade Records compilation album 'Metal Massacre XII'. The tape sold over 700 copies and gained the band a deal with Listenable Records in France. At this juncture Thorg changed his stage name to Grimm. An EP, 'Det Glemte Riket', was laid down at Hindu Lydstudio in February 1994. 2000 copies were pressed in 7? format, of which a collectable 500 were manufactured in blue vinyl. Meantime, the album 'Svartalvheim', cut during the same extended sessions, emerged in December.

Aphazel would relocate the band from Bergen to the USA and into the ANCIENT ranks came Lord Kaiaphas, previously known as Lord Vlad Luciferion whilst a member of the bands THOKK and GRAND BELIAL'S KEY. The band, signing to Metal Blade Records, also added drummer Kjetil. ANCIENT's second album, 'The Cainian Chronicle', recorded at Unisound Studios by Dan Swan? in January 1996, emerged in June, notably featuring guest female vocals from the then seventeen year old Kimberley Goss of Chicago's AVERNUS as the band now became almost entirely American. ANCIENT's evolution was borne out by the semi-conceptual nature of 'The Cainian Chronicle', much of its content drawn from the Biblical saga of Cain's temptation by Lilith with the remaining passages now pursuing mythological, Pagan themes. An unintentionally mirthful promotional video for the song ?Lilith's Embrace' depicted the band obliviously headbanging whilst Lord Kiaphas drew blood from Kimberley Goss.

European touring, backed by Metal Blade's budget, elevated the band's status. However, Goss was unceremoniously fired and duly joined Norwegians DIMMU BORGIR on loan for their European tour but cemented this into a permanent relationship later that same year. Goss would also put in onstage showings with THERION and subsequently found Power Metal band SINERGY.

Confusion followed the band into 1998 as ANCIENT imploded yet again. Out went Kaiaphas and Erichte and in came bassist Tony and Jesus Christ on moved over to keyboards. Erichte soon came back onto the scene with her SPIRITUS TENEBRAE project whilst Kaiaphas poured his energies into OROBOROS. Aphazel uprooted the band once more, this time for its second trans-global shift to Italy.

By 1999 ANCIENT's line-up for the album 'The Halls Of Eternity', executed at Flying Studios in Gravellona Toce, comprised Aphazel on lead vocals and guitar, vocalist Deadly Kristin, keyboard player Jesus Christ and drummer Krigse. Dhilorz was recruited on bass to finalize the membership shortly after the recordings and IBLIS guitarist Thidra was recruited for live work. World touring then ensued including the band's inaugural tour through Scandinavia.

ANCIENT's album 'The Cainian Chronicles' was pushed back to the forefront of media attention in August 1999 when Finnish black metal devotees Jarno Sebastian Elg, Terhi Johanna Tervashonka and Mika Kristian Riska were sentenced by a court in Hyvink?? for what was described by the media as a Satanic, ritualistic murder. The grisly crime had first come to light in October 1998 when a severed leg had been found on a rubbish tip.

Although the details of the case were deemed so horrific as to be held under Finnish secrecy laws for a 40 year period, newspapers claimed the unnamed victim ?suffered prolonged torture and eventually was strangled to death?, after which the murderers partook in ?ingesting some of the body parts?. Unfortunately for ANCIENT, this unsavoury episode took place whilst the three were listening to their 1996 album.

The group put in what was to be widely acknowledged to be a landmark performance at the 2000 'Wacken Open Air' festival in Germany. Upon completion of these dates Aphazel and Deadly Kristen busied themselves with the extra curricular Gothic ambient project DREAMLIKE HORROR.

In 2000 ANCIENT welcomed Italian ex-BEDEVILED and BLOODSTORM drummer Grom onboard for the EP release 'God Loves The Dead'. Not to be outdone with other members side ventures Diego 'Grom' Meraviglia would involve himself with Italian Doom mongers DOOMSWORD appearing on the 'Resound The Horn' album, Dhilorz cited membership of Death Metal band INFLICTION and Jesus Christ put his energies outside the band into FULLMOON SIDESHOW.

In mid 2002 Hammerheart Records announced a re-release the 'Det Glemte Riket' adding the 'Troltaar' release plus the 'Det Glemte Riket' 7" and unreleased material. August had Deadly Kristin announcing a new side formation billed as FROZEN SOUL, working in league with Tom Sibr?n Van Iersel as main composer on guitars and "growl" vocals and Bj?rn Jonsson on bass guitar.

Drummer Grom made headway with his 'Prog-Black' project band HORTUS ANIMAE, signing to the Black Lotus label for a debut album 'Waltzing Mephisto'. Deadly Kristin, converting to Islam, joined up with the technical Seattle based Progressive Death Metal band BYAXIS. Meantime, ANCIENT got to work on a new album in late 2003, recording 'Night Visit' at the Mirage and Alpha-Omega studios with producer Fredrik Nordstr?m. Former ANCIENT singer Kaiaphas made a guest appearance on one track on the album.

The band forged a touring alliance with Denmark's ILLDISPOSED and German act FINAL BREATH for European dates throughout March of 2005. April found Grom rehearsing with FIRE TRAILS, the new act assembled by VANADIUM leader Pino Scotto and in early September the drummer announced he was to close his five year tenure with ANCIENT. Deadly Kristin partnered with DJ Celt Islam and sitar player and imam Dawoud Kringle in England to collaborate on the Sufi-Electro project ANALOGUE FAKIR. During late 2005 Grom also enrolled into the ranks of ANDARK as session live drummer.

Back To The Land Of The Dead

The Halls Of Eternity