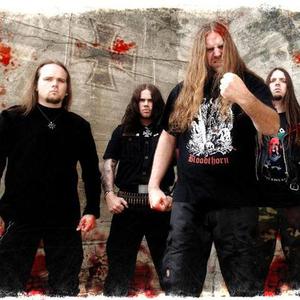 Since the early days of Bloodthorn back in 1992, the band's musical expression has developed and changed through their various releases. From the doomy, cold tunes of the ?Natteskyggen? demo, to the atmospheric debut ?In the Shadow of your black wings? and the sophomore album ?Onwards into Battle?, up to the aggressive wickedness of ?Under the Reign of Terror?. The later saw the band abandoning the female vocals and keyboards that had been so prominent on the first two albums and going back to their roots of raw, extreme metal.

Now, four and a half years have passed with countless delays, difficulties, and lineup-changes threatening to lay Bloodthorn to its' final rest. But the band remained strong and finally return with their heaviest and most extreme album to this day. Spanning almost fortyfive minutes and including songs such as the savage and frantic "Nightmare of Violence," "Sacrificial Slaughter" and "Monolith of the Dead,"as well as the brutal onslaught of "Hell on the Eastern Front" and "Blood and Iron" and the crushing heavyweight "They Will Arise", the Genocide album marks a definite milestone in the band's career.

The album was recorded in Godt Selskap Studio (Chton, Griffin, Keep of Kalessin) with producer/engineer Knut ?Fug? Prytz (Necrophagia) who made sure Bloodthorn finally got the sound they were after.

Under The Reign Of Terror

In The Shadow Of Your Black Wings