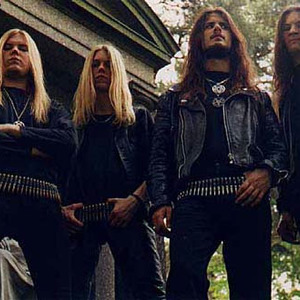 There are two bands named Necrophobic. The more popular was formed in 1989 in Stockholm, Sweden by guitarist David Parland and drummer Joakim Sterner to give the world a band that created unholy death metal. Necrophobic had a few different influences and focused more on creating a much more dark and evil sounding music, in the beginning influenced by Morbid Angel, Slayer and Bathory. The current line-up is: Tobias Sideg?rd - Vocals (Trident, Bajen Death Cult)

The more popular was formed in 1989 in Stockholm, Sweden by guitarist David Parland and drummer Joakim Sterner to give the world a band that created unholy death metal. Necrophobic had a few different influences and focused more on creating a much more dark and evil sounding music, in the beginning influenced by Morbid Angel, Slayer and Bathory.

During the underground years 1990-1992, the band built up a great reputation with the demo tapes Slow Asphyxiation (1990), Unholy Prophecies (1991) and the limited vinyl-ep The Call (1992). The great sales of these releases proved that Necrophobic was not just another band.

Necrophobic thought the time was right to move on and started to contact a few labels to get a record contract. Black Mark Production responded after just two days and it turned out to be the label the band signed with. In March 1993, members David Parland (guitar), Tobias Sideg?rd (bass), Anders Strokirk (vocals) and Joakim Sterner (drums) entered the studio and recorded the debut album The Nocturnal Silence which saw the light of day a few weeks later, consisting of nine songs of pure blasphemous death metal to render the most demanding listeners hearts in flames. Even though the death metal scene had become crammed with bands, The Nocturnal Silence got top scores in most magazines over the world and found itself placed directly into the German magazine Rock Hard's chart in the 9th position. A few months later, vocalist Anders Strokirk decided to leave the band. Tobias Sideg?rd took over the vocal part and the band also added a guitarist in Martin Halfdan.

Being a very self-critical band, Necrophobic had some troubles getting the new material together for the next album. It wasn't that they didn't come up with material. No, it was more that it didn't satisfy the members 100%. As the band felt that they've been away from the scene a little too long, they decided to release a mini-album, entitled Spawned by Evil. This foretaste of what to expect on the forthcoming 2nd full length album Darkside took the world by storm. Still, around the time of the release of Spawned by Evil (spring 1996), guitarist David Parland decided to leave the band.

Necrophobic continued as a 3-piece for a while, but later found a replacement for the vacant spot in guitarist Sebastian Ramstedt (previously from the band Morpheus).

In February 1997, the wait was over. Darkside was released. People's expectations were high. Could the band top the previous releases? The answer was yes. Again, the world press and the fans agreed. "Darkside is a milestone" were the most common reactions to the album and, again, the band got top scores from most magazines and the underground press from all over the world. On this album, Necrophobic had moved further in the dark and evil domains. As most of the death metal bands seemed to slow down their death metal sound and music and had become easier to listen to, Necrophobic did the opposite... they sped up, became rawer sounding and so forth.

In the winter 1999, it was time for the 3rd full length album. Necrophobic was ready for war again with the release of The Third Antichrist. The music was still very much as before, yet developed! However, the dark and haunting evil feeling, that is the band's trademark, was not lost here. On the contrary! The great and positive response from the world was still there and the band also started to play more abroad.

During the festival shows in Germany in August 2000, guitarist Martin Halfdan told the band that he would leave to continue play a different kind of extreme metal. Also, around that time, Necrophobic got contacted by Guido Heijnens from Hammerheart Records, who investigated the possibility for the band to do a label change. Necrophobic had also talked about doing something about their situation. Releasing killer album after killer album and keeping the great and high standard the band has without getting much in return from Black Mark Production was really annoying for Necrophobic. The members felt that staying with the label would only be to their detriment. So, after months of negotiating back and forth, the band left Black Mark Production and signed with Hammerheart Records in April 2001. During this period, the band had just found the replacement for Martin Halfdan in Johan Bergeb?ck (previously from the band Morpheus).

Necrophobic felt reborn and started to complete the material for the 4th full length album. Feeling fresh air in the band, and having a new record label that the band felt have great potential and do the band justice, the writing of the new material went very easy. In short, the new album Bloodhymns is quite equal to The Third Antichrist, but with a far more aggressive and heavier production. Ten songs that will make you bleed ?til death! The northen warriors have returned to conquer!!!

After touring on the Bloodhymns album, the record label transformed into Karmageddon Media, but the band felt that they had to move?again. Things didn't feel right and there was a lot of rumours that increased the bad feeling towards the label. The business was also badly run. If a label is not steady and can not back up a band, it indirectly influences that band's creativity and makes it difficult to work.

In the end of 2004, Swedish record label Regain Records approached the band and explained why an agreement between both parts should work out. During 2005, new material was written and business was solved with old parts and new, as Necrophobic signed a new deal with Regain Records.

In November 2005, Necrophobic entered the studio to record their most epic album of all time. A new chapter is open. The music on the new album Hrimthursum is the most varied to date, both musically and lyrically, and even if the album lasts for almost 60 minutes, you feel like you just started listening to it. It's a journey you will never want to leave!

Necrophobic has always stayed true to their style and will do as long as the band will exist. Their music will surely bring chills down your spine. Put their albums on and find yourselves getting possessed with them!!!

The other was a Thrash Metal Band hailing from Poland.

Dawn of the Damned

The Call Of Unholy Asphyxation