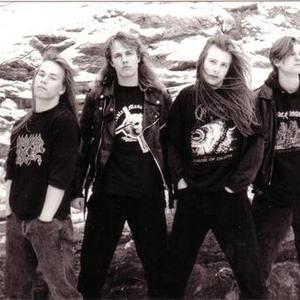 Desultory is a death metal band formed in 1989 in Stockholm, Sweden. Desultory was part of the first wave of Swedish death metal bands, alongside Nihilist, Grave, Dismember and many others. Into Eternity, their Metal Blade debut following a lesser-known EP release, is standard for the genre, energetic and forceful, straddling the line between the more brutal American death style and the melodic Gothenburg variety.

By most accounts, the followup, Bitterness, is more of the same, but 1996's Swallow the Snake is quite a different animal, dropping the death vocals (and, for the most part, death metal itself), for a more heavy rock sound likened by some to Soundgarden. Having been dropped by Metal Blade, they disappeared around 1996-1997, but the three members from the Snake album recruited a new fourth member and, continuing the progression from that last album, continued on as the heavy/stoner metal act Zebulon, releasing at least one EP and one LP.

Recently Desultory has reformed in June of 2009 and has signed a 2 record deal with Pulverized Records.