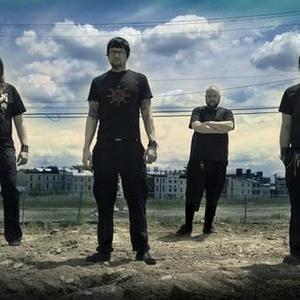 WITHERED, formed in 2003, exists to explore the darker aspects of human existence and deliver it to the masses while exemplifying unbridled truths about human nature. From the exploration of coping with tragedy to theoretical philosophical approaches, WITHERED continues to push their boundaries of perception into a realm of solitude and raw introspective discovery. They have released two full length albums, Memento Mori (2005 - Lifeforce) and Folie Circulaire (2008 - Prosthetic), which have both been critically acclaimed and topped numerous year end and decade end lists.

WITHERED mixes a blackened atmosphere with the weight of doom metal & old school Scandinavian death metal to culminate a unique blend of extreme styles and expression. Their third full length came out in October 2010 titled Dualitas to high critical acclaim..

History
-2003 ? Withered was formed as a concept by Chris Freeman and Mike Thompson. They brought in Wes Kever (drums) and Greg Hess (bass) to complete the lineup and to create Withered's bull dozer of a rhythm section. They immediately wrote 5 songs that were recorded (3 of which were released on their self titled demo).
-2004 ? Began performing live and toured the US east coast extensively.
-2005 ? Withered signed to Lifeforce records and released ?Memento Mori? in September. It was very well received by critics and fans. Was honored with the 4 spot on decibel magazine's top 40 list as well as making many other year end lists and receiving high praise in reviews and articles. The release was followed up with a UK tour supporting Mastodon & High On Fire in December.
-2006 ? The US touring cycle began with a string of successful east coast and Midwest tours supporting Dismember, Grave, and Vital Remains in October. Immediately following the tour, Wes & Greg both left the band. They had both started new families causing their focus to be needed elsewhere.
-2007 ? Early in the year, Withered's rhythm section was replaced with Mike Longoria (bass/noise/atmosphere) and Beau Brandon (drums). Both had collaborated on numerous projects for over a decade. Their history and uncanny approach to rhythms has proven to be one of the most unique and formidable rhythm sections in extreme metal today. Regional touring began almost immediately and they started work on their 2nd full length between tours with Skeletonwitch & Zoroaster.
-2008 ? Entered the studio in February to record ?Folie Circulaire? with producer Phillip Cope (kylesa, baroness, black tusk). The album was released in late June and also received high praise throughout the scene. Withered was once again honored by making many year-end lists and being offered some fantastic touring opportunities. They followed up the release with a full US tour as direct support for Sweden's Watain.
-2009 ? Touring continued and withered was featured at the 1st Scion Festival, the New England hardcore and metal festival, & even the Maryland Deathfest. Withered supported Mayhem, Cephalic Carnage, & Cattle Decapitation in June for a full US tour. In August, they were offered a special mini-tour as direct support for Sweden's Marduk in the Northeast US. They spent the rest of the year writing for their 3rd full length to be released in fall of 2010.

Reviews
"These tracks contain a vast, roaring sea of guitar, and after a while you stop thinking about the artists' hands; it sounds as if it's not made by pale, bearded guys from Atlanta but by forces of weather." - Ben Ratliff for The New York Times

"5.4 of 6 - Folie Circulaire had me riveted from its opening strains to the last moments of its closing Necrophobic cover. . . .Withered are the future of heavy metal." - Doug Moore for MetalReview.com

"4 of 5 stars - [Withered] mixes dense, lurching doom with pummeling blast beats, crafting songs that are as bleak and fraught with palpable tension as a blackened tornado funnel cloud on a distant horizon. The 10 tracks link together seamlessly in a 45-minute-long lesson in abject human misery." - Adem Tepedelen for Revolver Magazine

"If you can envision a soundtrack befitting a soul's slow descent into madness, Withered's Folie Circulaire would be about as close as you can get." - Alxs Ness for Abort Magazine

"In the very capable hands of Withered, the possibilities for sonic destruction seem limitless and ultimately, a formality. " - David E Gehlke for Blistering.com

"9 out of 10 - Folie Circulaire sounds like a blackened cross between My Bloody Valentine and Morbid Angel." - Rod Smith for Decibel magazine

"4.5 of 5 sparrows - The music is at times so stunning and overwhelming...Withered have taken gorgeous music and have given it a bath of blood, piss and shit." - Hansel for deafsparrow.com

"With Folie Circulaire , black-metal underdogs WITHERED unleashed the bleakest, most constrictive metal opus Atlanta has seen since Mastodon's Leviathan.
Every time the group takes the stage, slow, pulverizing grooves grind,bash and build to a climax of machine gun drums, helicopter head-banging and a bestial growl. While Mastodon was busy cracking the Skye, Withered punched a hole through the earth and reached deep into the bowels of hell to summon an epic, labyrinthine roar. "-
Creative Loafing Best of 2009


2) Withered was also a black metal band from Iceland, who have put out one CD. "The Midnight Gate" was released in 2006 on Eh Records. They're relatively unknown, and play decent black metal with acoustic touches, writing in English and Icelandic. They disbanded shortly thereafter.