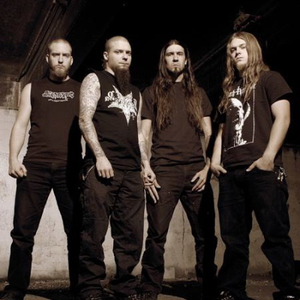 Goatwhore is a blackened death metal band from the swamps of New Orleans, LA. They were formed by well known musicians from the Louisiana metal scene. They first came together in 1996/97 when Sammy Duet (former Acid Bath/Crowbar guitarist) and Zak Nolan (former drummer of Goatwhore, now replaced by Zack Simmons) jammed together as a little sideproject when Acid Bath was taking a break. They soon made some four track demos.

When Acid Bath fell apart in 1997 (due to the loss of bassist Audie Pitre) they dedicated more time to Goatwhore (formerly known as Kilgore). They quickly turned into a 4 piece with the addition of Ben Falgoust and Pat Bruders. In 2004 Goatwhore was offered a deal by Metal Blade Records, who they are signed with now........

"We are timeless ... within damnation"

With its 2000 debut, The Eclipse of the Ages Into Black, Louisiana miscreants Goatwhore explored old school satanic black metal as no American act had before. The band's flame-throwing ferocity and blasphemous conviction hailed such pioneers as Bathory and Venom and offered respite to purists grown weary of the fanciful, over-orchestrated musings of Europe's contemporary black metallurgists.

Goatwhore's new second effort, Funeral Dirge for the Rotting Sun, ventures into darker, less conventional territory. Probing the pitch-black recesses of mind and soul in a disturbing, introspective examination of dark forces at work, and unleashing it all with a feral hookiness and atmospheric flare, the band steps beyond the bounds of mere black metal into a realm all its own.

While the band's raw, vicious tone remains - and Falgoust and Duet's high-end, low-end vocal tradeoffs ensure plenty of menace - there's more order to the chaos on Funeral Dirge. The unrelenting tempos and buzz-sawing guitar that fueled Ages have been refined to provide "Vengeance of Demonic Fury" or "Baptized In A Storm Of Swords" with more structure, depth and texture.

Goatwhore takes a rather drastic turn on "As The Sun Turns To Ash" and "Fires of the Judas Blood." With their dramatically slower pace and eerie vocal/guitar interplay, they echo Celtic Frost's ground-breaking Into The Pandemonium and lend an even more ominous air to the album.

After releasing Funeral Dirge for the Rotting Sun in 2003, the band jumped to Metal Blade for 2006's A Haunting Curse, which took on a much clearer blackened death metal style.

2009 saw Goatwhore's latest release, Carving Out The Eyes Of God.

Angels Hung From The Arches Of Heaven

Constricting Rage of the Merciless

Blood for the Master

Carving Out The Eyes Of God

Funeral Dirge For The Rotting Sun

The Eclipse Of Ages Into Black