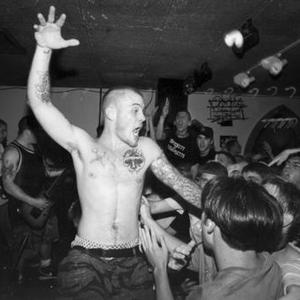 Integrity is a metallic hardcore Band originally from Cleveland, Ohio that formed in 1988, combining a blend of classic horror, apocalyptic visions and religious dementia with a metallic hardcore punk backbone that was not particularly common in the late 1980s-early '90s hardcore punk movement. Officially forming in late summer of 1988 in Cleveland, Ohio, the band consisted of vocalist Dwid Hellion, guitarist Aaron Melnick, bassist Tom Brose and drummer Tony Pines..

Officially forming in late summer of 1988 in Cleveland, Ohio, the band consisted of vocalist Dwid Hellion, guitarist Aaron Melnick, bassist Tom Brose and drummer Tony Pines.. Originally playing a fast-paced form of hardcore punk with a straight edge attitude, the band later changed their sound and began combining hardcore punk, heavy metal and apocalyptic lyrics that was not particularly common in the late 1980s-early '90s hardcore punk movement, a sound later know as "holy terror", which a number of other bands began to adopt at the time and later.

They had once played together (minus Tom) in an earlier band called Die Hard, but due to the opinion of the other members that Dwids vocals/lyrics would not be accepted by the mainstream hardcore scene, Dwid was kicked out of the band and was replaced by ?Stork? Schlacter.

After leaving Die Hard, Dwid was contacted by Tony Scummel on a recommendation from Walter of the Gorilla Biscuits. Dwid agreed to demo some songs for a possible record on Tony's new label Victory Records.


Dwid eventually recruited Aaron, Tony and Tom. Aaron and Dwid wrote some songs and the band recorded the 7? titled ?In Contrast of Sin? in late November and early December of 1989. At this point Die Hard were still together but since Aaron and Tony were putting half their effort into Integrity, Die Hard broke up shortly after recording their first album, ?Looking Out For #1?.

In the months following, the band added Frank Cavanaugh as second guitarist and they recorded 3 new songs in the summer of 1990, with the song titled ?Darkness? being released on Victory's ?Only the Strong? 7? record. ?Darkness?, along with ?March of the Damned?, was released as a cassette single titled ?Grace of the Unholy? on Progression Records. ?Dawn of a New Apocalypse ? was also recorded, but the master of that song was accidentally lost. This track resurfaced in 2010 from an italian collector who purchased the master from Ron Guardepe of Overkill records. The lost song was released by A389Records as a limited release. Bill Mckinney replaced Frank Cavanaugh shortly after these recordings.

Integrity had planned to release their debut full length on Progression records titled ?Den of Iniquity? but Progression went out of business before this could happen.

Integrity by this point had built quite a reputation, even though they had been together for less than a year, thanks in part to their disgust toward many other bands. Eventually problems between the band and Tony Scummel made them leave Victory Records.

In 1991 the band, with Chris Hawthorne Smith now on second guitar, signed to Overkill Records and recorded their debut full length that September. ?Those Who Fear Tomorrow? would be released in the first month of 1992 on CD and cassette only. Dave Nicholi Araca replaced Tony on drums after the album was recorded and the band recorded 3 new songs in February of 1992. In late 1992 Integrity toured Europe for the first time along with Neurosis and Into Another. Mark Konopka would play drums during this tour.

In 1993 numerous drummers would be part of the line up including Mark Konopka, Bill Gill, Chuck Uhler and Dave Araca. Integrity also recorded a Negative Approach cover and a new track titled ?Jimson Isolation?, both with Dave Araca on drums. They would also tour Europe for a 2nd time again with Mark Konopka on drums.

In 1994 Victory Records and Integrity made amends and the band signed to Victory once again. Frank Novinec went on to replace Chris Hawthorne on second guitar. In November, Integrity entered the studio and started recording songs for their upcoming LP titled "Systems Overload". Mark Konopka played drums during these recordings.

By February of 1995 the band finished recording for the new LP which was released on May 1st. They played a US tour that summer playing on both the West and East coast. They entered the studio that October and re-recorded ?Humanity is the Devil? which would not be released for some time. Originally Bob Zeiger was the drummer in the studio, but due to Bill Korecky and Victory Records opinion of Bobs performance he was pushed out of the band and replaced by Chris Dora. That November they toured Europe for a third time along with Ringworm, Bob Zeiger played drums during this tour.

In March of 1996 Integrity entered the studio and recorded three new songs, one of which would be released on their split 7? with "Psywarfare", Dwid's side project. They also recorded 3 songs under the moniker ?Rape Whistle? which featured all the members of Integrity along with Jason Popson and Bill Korecky. These songs appeared on a spilt 7? record titled ?A Compilation for Atonement? which was released by Jason Popson's label. ?Humanity is the Devil? would finally be released later that year.

1997 saw Integrity entering the studio that March to record songs for their next album, titled ?Seasons in the Size of Days?. Immediately after these recording sessions, the band left to tour Europe along with Fury of Five. That September Integrity would tour the US to promote the new album.

By 1998, internal friction had come to its boiling point and the band decided to call it quits, with their last show scheduled for October in Chicago, Illinois. Integrity never got to play as Dwid got into an altercation with members of security at the club.

A few weeks later Aaron put his side band, In Cold Blood into a full time position and Dwid resurrected the band with new members calling themselves "Integrity 2000". They entered the studio that January and in April of 1999 they released a self titled full length on Victory Records. After this release the line up was again changed and the band was then known as "Integ2000". They released a split CD with the band Fear Tomorrow and also released a full length that included cover songs of Slayer and Billy Idol. They would do a very short European tour that November.

In May 2001 after another round of line up changes, the band released a full length titled ?Closure?, Dwid even briefly changed the band's name to Angela Delamorte after its release. Angela Delamorte even recorded several songs, one song appearing on a Victory records sampler CD, but they broke up a short time later. The band played a few shows that summer including a show in Chicago to promote the new album and they also would tour Europe again that Fall. On the 23rd of December Integrity played another ?final show ever? at Peabody's in Cleveland.

The band would reunite again though on August 16th 2002 and play a reunion show at Peabodys Cleveland. This lineup consisted of Frank Novinec on Guitar, Blaze Tishko on Guitar, Tony Pines on Drums and JC Koszewski on bass. The band would also play a show in Connecticut that November.

In 2004 Dwid recruited members from a couple of different European bands for a one off Integrity Japan tour.

On 26 March 2005, Integrity reunited and played a show at Peabody's in Cleveland which included members Mike and Steve from the ?To Die For? lineup along with new guitarist Matt Brewer and new drummer Nate Jochum. In October they performed a 10 day east coast tour known as the ?Blackest Curse Tour?. On this year the band also released the "Always Is Always Forever" DVD released by Dwid himself, on the Vanhellion label, and containing promotional videos and live footage from 1988 to 2003.

The band came out of a lengthy hibernation in the summer of 2008 and performed in Belgium for the North Sea Hardcore Fest and a complete European tour which lasted almost 6 weeks playing alongside Converge and Coliseum. They also worked on material for their return LP titled ?The Blackest Curse?. In October the band released a long awaited new record titled ?Walpurgisnacht? with songs that were written in 2005. To finish out 2008 they played the Fun Fun Fun Fest in Texas on November 8th which was the last show with Guitarist Matt Brewer.

On January 12th 2009 the band played a show in Baltimore, MD with new Guitarist Rob Orr. They went on to play 4 more shows in 2009 including a few shows in Japan. A split 7? record with Creepout was released around this time featuring Rob Orr' first song writing contributions.

2010 began with Integrity performing on January 9th alongside Ringworm, Gehenna, and Pulling Teeth in Baltimore, MD. They would go on to play a show in Warsaw on March 20th which was the final show with longtime members Mike and Nate Jochum and Steve Rauckhurst.

After this show a new "tour only " lineup was recruited and they would go on to play 2 shows on the 22nd and 29th of May. After many delays, Integrity's new album ?The Blackest Curse? was also released that May. July saw Integrity playing 2 shows in California. A split 7' record was released featuring songs from Gehenna, Unreal City, VVegas and Integrity. The Integrity song titled "Orrchida" was written by Guitarist Rob Orr and he played all the instruments with Dwid laying out the vocal tracks. The ?We Are The End? 7? featured two new Integrity songs with all instruments again being played by Rob Orr.

In May, 2011, Integrity released the "Thee Destroy+ORR", a compilation album of music from the band's "Rob Orr era"; compiling the songs from the "Detonate Worlds Plague" EP", the "We are the End" EP, the "7.17" compilation, and the splits with Rot in Hell and Creepout, plus a few other odds and ends that include a 34-minute interview and a cover of Zouo's "No Power".

(Note: various re-releases and some compilations are omitted when they feature no new or unreleased material.)

Howling, for the Nightmare Shall Consume

Sliver In The Hands Of Time

From The Womb To The Tomb Vol. 1