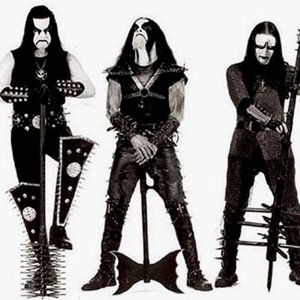 Immortal is a prominent black metal band from Bergen, Norway. The group began in 1989 as "Amputation", a death metal band. Immortal's early full-length releases were of a traditional, yet complex black metal style, but their acclaimed album At the Heart of Winter saw the band begin to experiment with a fusion of black metal and German thrash. The resulting sound was a style which characterized Immortal's later works. Immortal has been influential to many modern metal artists. Immortal's founders; Abbath and Demonaz, have attained a legendary status in the Scandinavian heavy metal scene.

Out of these many bands Immortal has arguably maintained the most occult-mysticism image and way of life traditionally credited to black metal. Their peculiar music style of melodic black metal has guaranteed them a spot on the list of the best bands in the history of the genre, and has most definitely triggered the rise of their albums sales, even though most of the albums, with the exception of Sons of Northern Darkness, are quite difficult to obtain in some regions.

Amputation recorded their first two demos in 1989 with Demonaz Doom Occulta and Jorn Tunsberg on guitars, Abbath Doom Occulta on bass and vocals, and Armagedda on drums. The group changed its name to "Immortal" around 1990-1991. Their third demo, Unholy Forces of Evil, saw a stylistic change to black metal and earned them a record contract. Tunsberg played many of the guitar parts of Immortal's first album Diabolical Fullmoon Mysticism, but is not officially credited.

Gradually, Immortal gained immense popularity in the underground, releasing several highly-acclaimed records on the French label Osmose. Unlike many other black metal bands, Immortal's lyrical theme was not based around Satanism, but rather dealt with an imaginary kingdom called Blashyrkh where the eponymous God of frost Mighty Ravendark rules. Arguably, their best effort from this early period is Pure Holocaust, which served as a genre-defining milestone.

In 1995, the band released two video clips directed by British artist David Palser entitled Masters of Nebulah Frost through Osmose Productions. They featured many bizarrely-shot images of frozen landscapes and vast forests. These clips have become the template for many other bands producing such works.

Apart from the two core members Abbath and Demonaz, Immortal didn't find a stable lineup until 1996, when drummer Horgh joined the band. In 1997, main lyricist and guitarist Demonaz suffered an arm injury (acute tendonitis) and was unable to continue playing. Still, he continued writing new material and managed the band, while bassist Abbath took over the guitar duty. In 2000, Immortal signed a record contract with German label Nuclear Blast; this change to a more prominent record company didn't affect their style, something which they proved on their latest record, Sons of Northern Darkness.

Immortal decided to split during the summer of 2003 for personal reasons of the band members. However, in mid-October 2005, Abbath and original Immortal drummer Armagedda reunited, and along with Ex-Gorgoroth bassist King ov Hell (aka. T.C. King) and Enslaved guitarist Arve Isdal (aka. Ice Dale), they began work on a new project, dubbed I. Also here Demonaz provided the lyrics. This new band entered the studio at the end of April 2006 to record their debut album and was released 3rd of November 2006 with the title Between Two Worlds.

In July 2006 it was announced that Immortal would reunite for a string of summer shows in 2007, headlining the 2007 Wacken Open Air festival, 2007 Inferno Festival (Oslo), Metalcamp festival (Slovenia) and the Hole In The Sky festival (Bergen) in Norway.

The Seventh Date Of Blasrykh

At The Heart Of Winter

Battles In The North