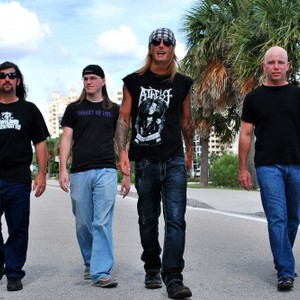 Atheist is a technical death metal band from Sarasota, Florida, USA and regarded as one of the main developers of Floridian death metal. Their music is highly technical and sometimes reminiscent of jazz, combining brutal riffs with subtle latin music arrangements. They were founded in 1984 under the name Oblivion by guitarist (and later vocalist) Kelly Shaefer and drummer Mark. Mark was later replaced by drummer Steve Flynn because Kelly and Steve had similar musical tastes. Roger Patterson would later join as their bassist.

By early 1985, Oblivion changed their name to R.A.V.A.G.E. (Raging Atheists Vowing A Gory End). As R.A.V.A.G.E., they recruited a singer that is only known by the name of Scrappy. He did not participate on any of the R.A.V.A.G.E. recordings. The first demo was released in 1985 and it was called Kill or Be Killed (also known as the Rotting in Hell demo). The next demo would be the last in 1987 called On They Slay with lead guitarist Mark Scwartzberg.

After their last demo as R.A.V.A.G.E., they changed their moniker to Atheist. They released a couple of demos, Hell Hath No Mercy in 1987 and Beyond in 1988. They recorded their debut album, Piece of Time, in 1988 and it was to be released on the label Mean Machine, but the record label later went bankrupt. Piece of Time thus not released until 1990 on Active. In 1989, another demo was released. In 1991, bassist Roger Patterson died in a car accident and Atheist recruited Tony Choy to record their second album, the now classic Unquestionable Presence. Atheist disbanded for the first time in 1992, reuniting in 1993 and recording their last album Elements before disbanding for the second time.

Kelly Schaefer played with Neurotica until 2002. Tony Choy played in a number of other bands, including Pestilence, Cynic and a Latin band called Area 305. Former drummer Steve Flynn had for some time recently re-emerged in a new band called Gnostic, www.gnosticmusic.com

Relapse Records re-issued the band's three albums in late 2005, as well as a vinyl box set containing the three albums plus the R.A.V.A.G.E. demo On They Slay.

In January 2006, frontman Kelly Shaefer reassembled much of what was widely considered ATHEIST's classic recording lineup (Shaefer, bassist Tony Choy, and drummer Steven Flynn) to perform a select number of one-off shows to celebrate the re-issue of their wildly-influential catalog (1988's "Piece of Time", 1993's "Elements", and the 1991's legendary "Unquestionable Presence"). Among those shows were performances at such legendary festivals such as Germany's Wacken Open Air, Norway's Hole In The Sky, Italy's Evolution, England's Bloodstock Open Air, and the Los Angeles' Murderfest.

"(I'm) heading to Atlanta next Friday to jam with ATHEIST drummer and my best friend Mr. Steve Flynn, this wil mark the first time we have written together since 1991's 'Unquestionable Presence'. So I am curious how it will sound. I know it will be sick, there is a formula that me and Flynn have that automatically sounds like ATHEIST...so it will be fun to hear what it will sound like. And who knows? If it it goes well...?? We will see what happens."

On November 8th, 2010, 17 years after their last album had been recorded, Atheist released their fourth full-length studio album "Jupiter" on Season Of Mist.