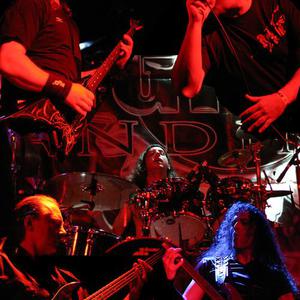 Mekong Delta is a thrash metal band from Germany. The took their name from a river delta in Vietnam. The band pioneered the genre that is known as progressive thrash metal today, implementing strong melodic elements and classical concepts (usually based on Modest Mussorgsky's pieces) into their speed thrash metal sound, which became most prominent on their "Kaleidoscope" album. It is clear that the band is the key influence on modern technical progressive metal bands like Spiral Architect. Their newest album, titled "Lurking Fear", was released on 24.08.2007 after ten years of silence.

When the band first started, they were surrounded by a cloud of mystery, as all of the band members were under contracts with other bands, and thus had to use pseudonyms to avoid any legal problems.

The current line-up is:

Tales Of A Future Past

In A Mirror Darkly

Wanderer On The Edge Of Time

Pictures At An Exhibition