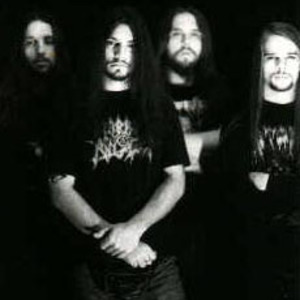 A highly technical and avant-garde death metal band, Gorguts was formed in 1989 by Luc Lemay (guitar/vocals), Sylvain Marcoux (guitar), Eric Giguere (bass) and Stephane Provencher (drums) in Sherbrooke, Quebec, Canada. They recorded a demo in 1990 entitled "And Then Comes Lividity", and then in 1991 released "Considered Dead" on Roadrunner, their first full length of death metal. The release was very promising, and even included a guest guitar solo by James Murphy and guest vocals by Chris Barnes.

Two years later in 1993, they released their second full length entitled "The Erosion of Sanity". Similar in style to their debut, this album had showed Gorguts had indeed developed in musicianship. However, this album was overlooked and became an unheard classic for many years.

The band fell silent for five years. Many assumed Gorguts was no more, until 1998 when Luc Lemay assembled a new lineup and unleashed a classic in avant-garde death metal "Obscura", which many will agree is the most technical, chaotic and downright lucid metal album ever recorded. Filled with irregular beats, discordant riffing, and complex song arrangements, "Obscura" turned out to be either indigestible by many, or seen for its true beauty by few. Three years later, Gorguts returned once again with "From Wisdom to Hate". Some consider this release to be a digression from "Obscura", but it was still much in the same avant-garde/technical vein. Dan Mongrain of Martyr was recruited for the second guitarist on this album, contributing to the writing process and lead guitar work as well.

Gorguts has since disbanded. After being out of print for many years, Roadrunner Records re-released their first two albums on a single disc, and Galy Record re-released their 1990 demo along with many other demo tracks throughout the years.

In October 2002, drummer Steve MacDonald hanged himself after suffering from years of depression. The band split up in 2005 and reformed in 2008.

As of December 2008, a demo track of Gorguts featuring guitar and programmed drums which was previously unheard by the public, surfaced online, and Lemay himself confirmed an upcoming reunion featuring Colin Marston, Kevin Hufnagel and John Longstreth. While the new Gorguts has been performing live and writing new material, Lemay stated that the band would not be entering the studio until the "late fall" of 2010 with a release date sometime in 2011.

The Band is currently signed to Century Media

From Wisdom To Hate

The Erosion Of Sanity

...And Then Comes Lividity (Demo)